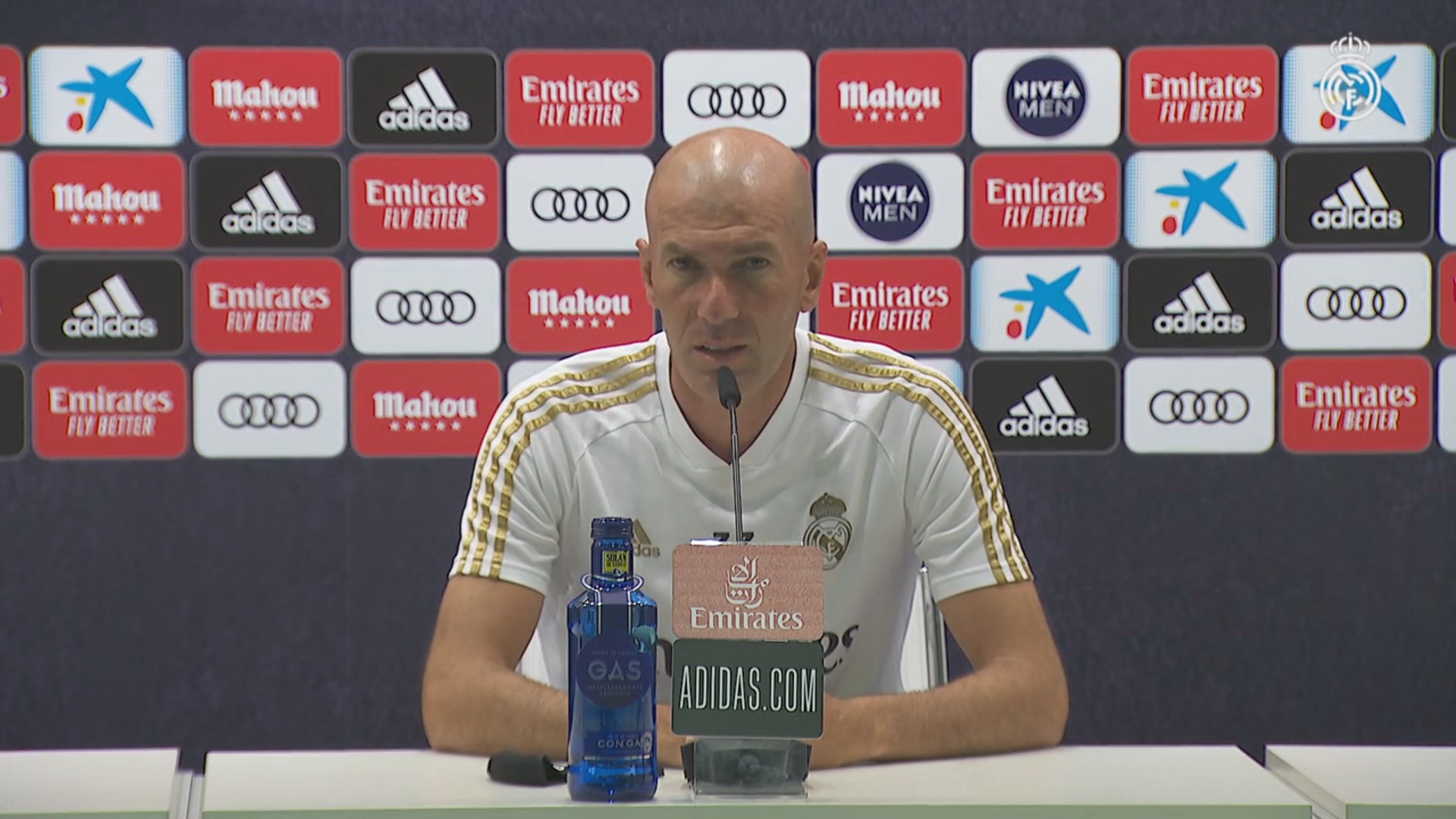 Real Madrid manager Zinedine Zidane held another virtual press conference today to preview Sunday night’s LaLiga matchday 32 clash against Espanyol (22:00 CET). The boss began the media briefing by talking about the opposition, and was asked about a range of questions, including his thoughts on Ramos’ progress since he joined the club, the defensive side of the game, Vinicius Jr, and more.

Here’s a full transcript of what Zidane had to say:

“We’ve got seven cup finals to go and the fact that we’ve won the past four games doesn’t change anything at all. We’ve got to keep on doing what we’ve been doing. Espanyol will make things very difficult for us and they’re in need of the points. Knowing the sort of game it’ll be, we’ll have to be focused and aware it’s another cup final. We’ll be going all out.

“We won’t be complacent. We’re aware of the situation and that it’s top versus bottom, but that counts for nothing in football and you’ve got to go out there and prove it on the pitch. They’ll want to get the three points at home. The same thing happened in the game against Mallorca. We know what we want and we’ll have to be determined and try to get the three points. Espanyol will be looking to do exactly the same.”

“You could see that he was capable of achieving what he’s currently doing. When he joined the club, he had those qualities but, above all, the personality. He wanted to win, he was raring to do what he’s doing, which is to make history at this club. I’m not surprised by it. We’re lucky to have him here at Real Madrid and I hope that he stays here until the end of his career.”

“I’m not going to be a coach for 20 years. I’ll retire before then. Because I’m not your average coach, anything can happen. That’ll be the case with me. I’ve not got anything planned in my head. The day-to-day work is what motivates me. I’ll go on and doing something else. In my head, I’ve always been a footballer. I had a career that lasted 18 or 19 years and when I was asked if I was going to go into management, I said ‘No’ and I have ended up doing so. It’s very wearing. I felt better when I was a player than I do as a coach. I’m happy with what I’ve achieved, but the pinnacle is when you end up playing for Real Madrid.”

“I’m lucky enough to be at this club and coach here. You’ve got to believe in what you do, enjoy what you have and not think about the things you haven’t got. I live day to day. I’m lucky to train the very best players. That’s what happens when you’re at the best club in the world, you get to coach the best players. I really enjoy myself in the matches but all the more so in the training sessions.”

“For me, as someone who likes to play more football, the defensive side of things is the most important part. We’ve got the advantage of having the defence we’ve got and to have players who are committed to what we’re doing. Defending isn’t just down to four or five players, it involves everyone. The team’s strength and attitude are really important to win and be successful.

“We haven’t altered anything, the players didn’t do much with the ball at home for those 60-70 days. But it’s done the team the world of good to come back with more hunger to play and you can see that on the pitch and in training.”

“The truth is that I’m at the best club in the world and I’m just focusing on what I’m doing. I’m not thinking about what’s going to happen. When you lose games here you’re criticised, but that doesn’t change a thing. We’re doing fine, winning games, but we haven’t achieved anything yet. We’re working well and hard, all focusing on the same thing and we’re just concentrating on the things we can control. My future is the least of our concerns.”

“We know where we are and the challenges that brings, but that doesn’t change anything. The important thing is the vibe every day and it’s good right now. We have to keep it up. There are some teams that have come back and had problems and others who are doing better, but we’re all in the same boat. We’ve all got a lot of games and it’s really demanding. You have to recover well and think about the small margins. There are seven games to go and we’re just focusing on Espanyol.”

“All the players are aware where they are and all of us who work here have ups and downs in our work. Such is life. When you’re going through a tough time, you have to work hard. We’re in good form and Vinicius Jr. is too. He’s 21 and there’s a lot of room for improvement there. But the focus here is only on the team and that’s good.”

“I don’t like singling one player out because what matters is the team, but they’re having exceptional careers at the club and that brings real joy. They’re two players who offer great assurance and they can be relied upon.”

A successful window leaves Real Madrid €200m to the good