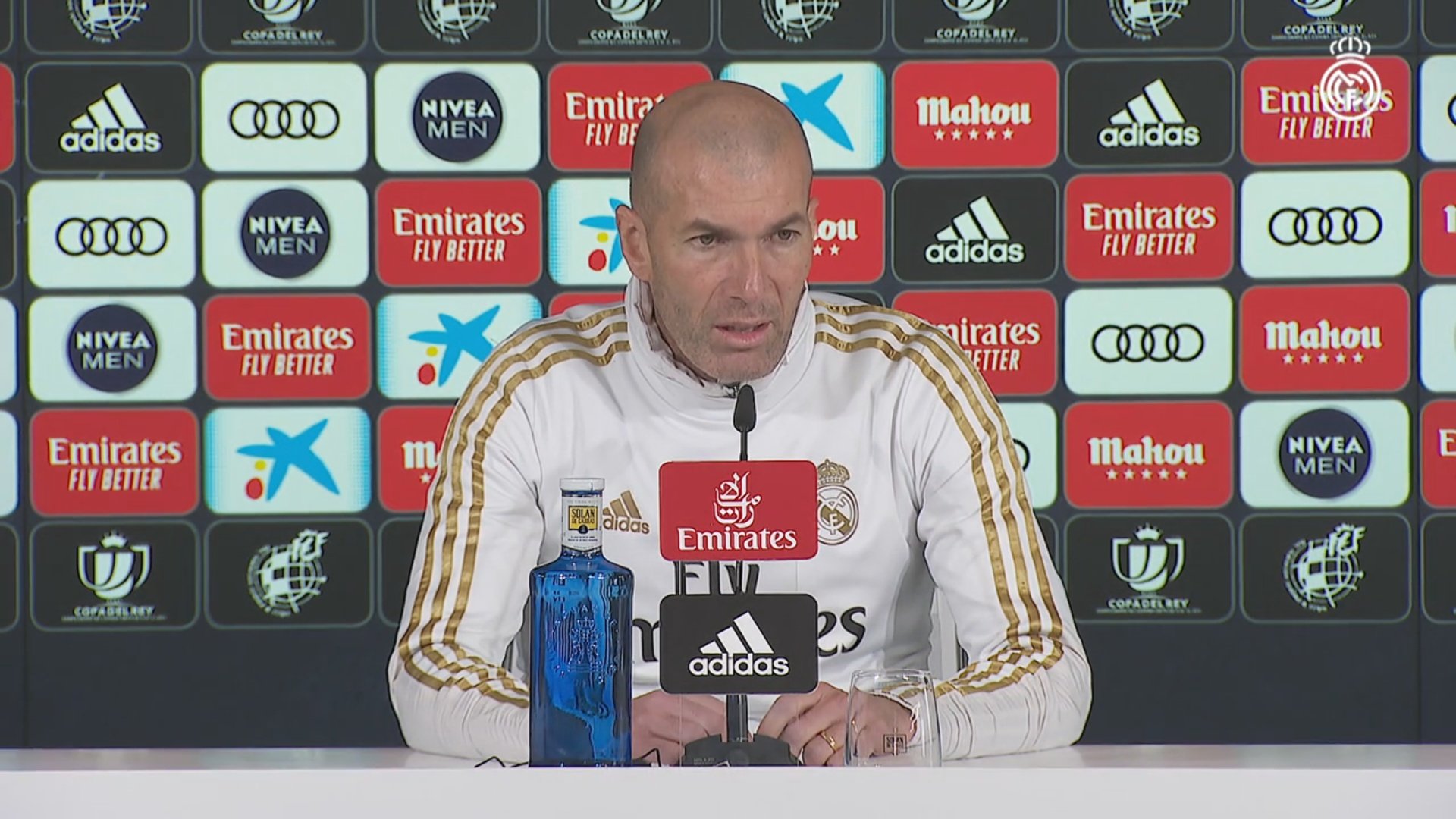 Zinedine Zidane faced the media for a press conference on Tuesday ahead of tomorrow’s Copa del Rey Round of 16 match against Real Zaragoza. Our head coach discussed the match at La Romareda, the new Cup format, Gareth Bale’s availability and more.

This is what he had to say:

“It’s a very difficult game. The opposition looks in great shape in the Segunda División and are fighting for promotion. We know the players they have and we have to go into the game with the utmost focus and intensity because we know tomorrow’s game is our most important right now. We have to give a good account of ourselves, because that’s how we’ll get our rewards on the pitch.

“When I put on a Real Madrid jersey, I want to do a top job in every game. This is a Copa del Rey clash, it’s our next job and we want to give it our best. We prepare to be in great shape and do a good job on the pitch when the games come around.”

“They’re a historic club who will surely make life hard for us. They want to be in the next round. They’ve got an experienced coach, with more Primera División games under his belt than anyone else and I’m sure they’re ready to put in a great performance. We won’t be surprised about the difficulties we’re set to experience in Zaragoza tomorrow, that will be the case until the end. Kagawa is a key man for Zaragoza, he’s a lovely footballer and I wish him the best, but only after the game. I’m only interested in what we do.”

“They asked me the same thing the other day and as I said, I’m used to it because it’s always been over a single game in France. I like the idea. It’s slicker, you know it’s a case of one game, and that’s it. We adapt to whatever we’re given. I don’t think there’s a lack of motivation for the Cup. Three Copa del Rey titles in 30 years is one thing, but Real Madrid has an amazing history with all it’s achieved to date and motivation is high for us because there’s a trophy at stake. We have to acknowledge that Madrid have 13 Champions Leagues, that’s an impressive figure. The Copa number is a bit weaker and we want to change that history. We’ll do our best.”

“He’s part of the squad just like the rest and we know how important he is. I love getting the best out of this squad in general, but I don’t hide the fact Casemiro is a crucial player who’s had a lot of minutes. Some players get more game time than others, that’s not going to change.”

“I’d rather have all my players available. The players want to be available to play as well. Hazard is back out on the pitch with the coaches but he hasn’t re-joined the group yet. We’ll see how we manage him this week. Elsewhere, we’re happy from a defensive perspective because we know that before you attack, you have to defend well, show intensity on defensive phases, and we’re doing a great job. But we also know that every game is different and we have to show we can adapt. We will try and put on a good display tomorrow.”

“This club has given me the chance to coach these players and this incredible team. I’m so fortunate to be here, I love this job and I’m excited to come in every day and work with them and make the most of the opportunity I have. I’ve been here 18 years now, first as a player, and I know what this place is all about. It’s very special and the positive thing is, that people here want to see their players give their best out on the pitch and the same goes for the coach. Whatever is discussed outside, good fortune or not, whether we’re a good side or not… Two months back things didn’t look great and there was a lot of criticism, but that’ll never change. We know what we’re doing and all we want to do is continue in this vein and the players are the most important element for me.”

“As ever, you’ll see tomorrow. I’ll announce the squad and you’ll see who’s in it. I’ve got almost everyone fit, there’s a couple with some problems but I’m not here to discuss that. We’ll see who makes the squad. Everyone wants to be fit to play, available and without any discomfort, that’s the most important thing. Almost all the players are back in top condition.”

“He’s got a few issues and he’s not available. When someone is struggling, it’s best not to risk it. I can’t tell you any more at this stage. I don’t like it and I’m sure he doesn’t like being out with that discomfort either.”

“Anything can happen at any club until the 31st. I’ve got my squad, I’ve got the best players, I want to perform with them and not concern myself with what’s happening outside. Every club is the same, if they need someone, they’ll do something, if not, they won’t.”

“I assess all the players here and what we’re concerned with for the players out on loan, is to get the minutes wherever they are. That’s what we want for Vallejo with his new team, and Lunin the same, as with the rest. We’ve got Odegaard at Real Sociedad and Ceballos out, it’s important to keep track of what they’re doing.”