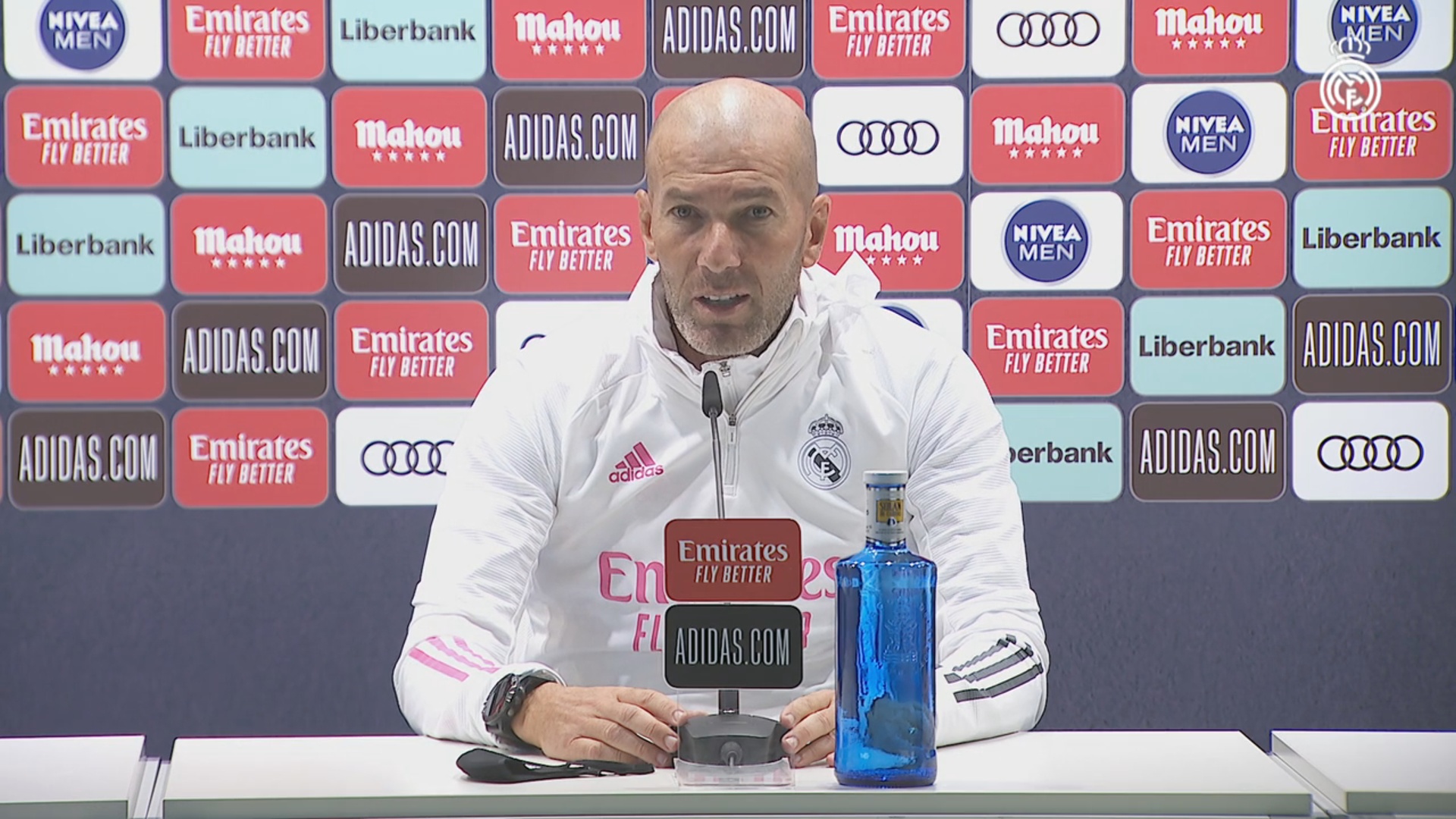 Zinedine Zidane was back in front of the media on Saturday as he looked ahead to Real Madrid’s opening LaLiga match of the 2020/21 season against Real Sociedad, which kicks-off on Sunday night at the Reale Arena (21:00 CET).

“The team has prepared really well. We’ve had the time to get ready and we begin the league season full of desire. The players are looking forward to the start of the LaLiga season. We’ve now completed our last training session and tomorrow we have the game. We’re happy to be back and playing. We’re aware of the situation and know that there are some people who are having a bad time of things and we’re lucky to be back and playing football.

“Real Sociedad are a very good side. Every season they prove to be really tough opponents and they always show that. They’re a side that plays some very good football, that doesn’t stop running and they always want to improve their performances. It’s a difficult place to go to, but a trip to San Sebastián is what the calendar came up with. We’re ready for it and tomorrow we’ll be happy to play our opening game of the LaLiga season at a tough ground, but it’s a good first game to get the season up and running.”

“We’re here and it’s what we work towards. We always know what’s at stake each year and that won’t change. That’s part of this great club and everything it has won. When we get going, we know right from day one that we have to prepare to do as best we possibly can. You’ve then got the consequences of that. If we train well and play as a team, just like we did last season, following the confinement, we’ll be in with a chance of winning things. We know just how tough LaLiga is and the players train to ensure they compete. It gets tougher each year because the teams we’re up against are becoming stronger all the time and we have to be ready.”

“The group is very similar and it’s the team that we won things with in a very special manner. All of the players face the challenge of playing in LaLiga and competing throughout the season and we want to achieve just what we did last year. There are no changes. The situation is really tough for a lot of people and I think about all of them. It’s also tough financially and we’re lucky enough to be able to get back to playing football. We’re going to have to adapt, but there are going to be so many changes during the course of this season that we’ll have to be ready and be aware that it’ll be a long season as we try to defend our title, which is something we’ll do with real desire.”

“He’s felt a bit of discomfort, but I think he’s fine. He’s back here and the role he’ll play will be just the same as all of the other players. I know that I have the best players here, that’s always been the case, right throughout the club’s history. The important thing for the players is that they’re ready and I think that Martin is, just like the rest of them. He’s a quality player and can bring something to the team. Only the best players play for Madrid.

“His progress has been amazing and he’s improved every season. He had a great year at Real Sociedad and is now a more complete player and we’ll use him this season. We’ve now got another player who can be important within this squad and that’s what it’s all about. We’ll field players so that they can perform to their best.”

“As for his injury, he’s now doing better. He’s training well and is currently working on his own, but things are on track. He had a fright when he was away with the national team, but he’s now doing lots better. As always, it’s a case of being cautious and taking things slowly. When he’s completely ready to train as usual, he’ll join up with us.”

“Rodrygo is a member of the first-team squad and it won’t change a thing. We have to congratulate him following his call-up to the national team.”

“It’s not as simple as that, but they’re in negotiations and he’s in London. I’ve never had an issue with him. I know what he’s done at this club, nobody can take that away from him and these are simply things that can happen for different reasons. All I can say is that he hasn’t signed yet, the deal isn’t done and we haven’t had any problems, which is what some people want. That hasn’t been the case. Nobody can question what he’s achieved. If there’s now a change in his career all I can do is wish him all the best and that’s all there is to it.

“I haven’t spoken to him.  He’s done excellently in terms of what he’s achieved here and there should be no discussion about that. He’s won a lot of silverware at Real Madrid. All of the players who play for Madrid are aware of the club they’re joining and I think that he’s proved his ability. We’ll now have to see what happens. We know what a fine player he is and what he’s done over these past seven years at Real Madrid. I think it’s also all about what the player wants. I’m not going to get into that. I’m not going to now go against what I’ve always said: that the player has done amazingly. Everyone is entitled to their opinion on these issues. Gareth is still our player and the deal has yet to have been completed. We’re not going to speak about things yet as that would make no sense.

“Such is life. You’ve got to accept things and there’s a reason why he’s stayed on here. We’re once again talking about this topic. The most important thing is what the player wants to do, that’s why my opinion hasn’t changed. We do things together, with the club and with the player and ultimately the player is the one who decides. I’ve never had any problems with Bale and never has he been a pain. But it’s not a weight off my shoulders because this is what my job is all about.  If it’s not Gareth this year it’ll be another player. I’ll always be counting on all of them and the most important thing is that the player competes.”

“Now that you’ve asked me about him, I want to take the opportunity to congratulate Reguilón for the season that he had. He’s a Real Madrid player and he had the chance to go out and play. We’ve got two players in every position and I’ve got two full-backs. What I can’t have is three or four because then it becomes a problem. I wish Reguilón all the very best because he had a good season at Sevilla and deserves to now go and join Tottenham.”

Rodrygo: “We are working hard to give our best to win LaLiga”

Achraf Hakimi: The boy who grew up too quickly