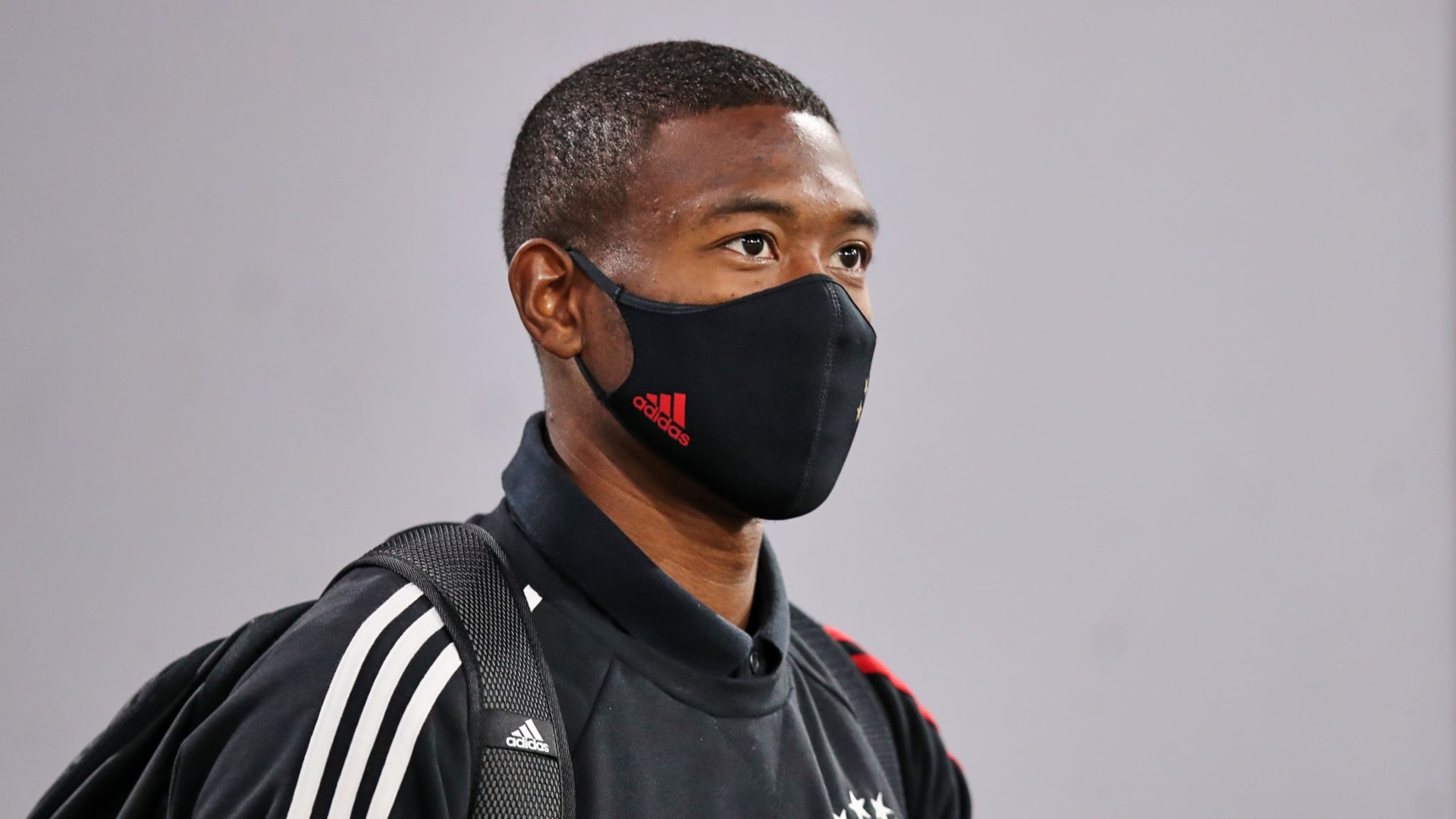 Real Madrid can be so frustrating to support, can’t they? It feels as if you’re in a toxic relationship at times. The fact that most of us know the players pick and choose when to turn up, is about as toxic and jarring as it gets. On Wednesday, the final game of 2020, Real slipped up to newly-promoted Elche, a game which shouldn’t have ended that way, but the manner in which it happened, was unacceptable.

It’s the fact that they can look like such a serious team against tough opponents, and can go on a six match winning streak, turning around a precarious UEFA Champions League group stage position, from being a game away from being out of the competition to instead topping the group. And only conceding two goals in those six games. But then, when they travel to Elche, knowing they need to win to keep pace with league leaders Atletico Madrid, who happen to have two games in hand, they just lose their heads, they go soft, as if they think this is a good game if any to have a slight breather in intensity.

But why? Why must Madrid do this? It’s so annoying, and so out of keeping with a team of this size, and players of this vast experience and skill-set. Do you know what is worse than the points being dropped, not the opponents that they’ve lost ground on Atleti against, but the manner in which it’s happened.

In La Liga this season, four matches have angered me, even though Madrid have dropped points in six games in total. Three of them have come against Cadiz, Deportivo Alaves, and most recently Elche. Leaders Atletico Madrid have played two of the aforementioned sides, beating Cadiz 4-0, and Elche 3-1, two games in which Real dropped five points from. And Atletico play Alaves this weekend, a side I’m sure Diego Simeone’s leaders will comfortably beat, knowing what’s at stake, and will remain focused throughout.

Contrast this to Real’s performances against them, and it’s not that Cadiz, Alaves or Elche were better than Real, or deserving of what they took from the games. Real know how to throw games away, and it’s building, you can almost expect lapses of concentration, failure to utilise their footballing IQ, just look: 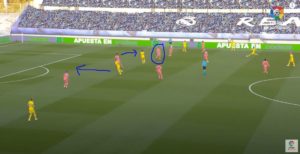 How is Sergio Ramos of all people losing his man, and not only that, Ramos being out of position means Raphael Varane only has eyes for the player Ramos is supposed to be guarding, when instead, the Frenchman should have had a glance behind him to see the danger. Nacho can’t press Alvaro Negrado in the centre, because that’ll leave Alex in acres of space on the left, so Lucas Vazquez should have been more alert to ensure Negrado can’t hurt Madrid in this sequence. But he did. 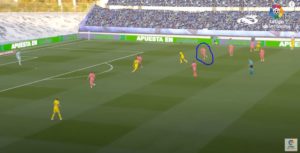 Even when the ball is played to Negrado, look how slow Ramos is to react to the Anthony Lozano run. Varane doesn’t react fast enough either, meaning Negrado has time to head the ball to his target, who’s on the move and hasn’t been picked up, who eventually goes and scores. Nacho, and Vazquez have barely moved between the two screenshots. It’s basic, and so frustrating, because Ramos shouldn’t need to be that far up the pitch while defending. Toni Kroos is already there to help Marcelo, and so is Luka Modric, so why did the captain feel it was important for him to push up against a team which likes playing the ball over the top to their target-man Negrado? 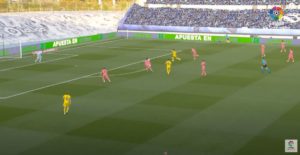 The third screenshot in the same sequence is hilariously bad, and baffling if you ask me. Kroos, Modric and Marcelo haven’t moved at all, nor have Vazquez and Nacho, Varane is now further away from Negrado so tries to put on the afterburners to catch up with Lozano and Ramos was simply too slow to react and Lozano would eventually score the winning goal. That was three points dropped. 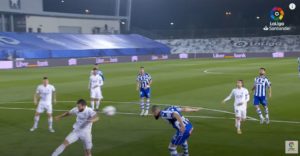 Then the defeat to Alaves was the consequence of further embarrassing errors. In the age of VAR, every professional footballer should know they can’t get away with something like this. Not only is Nacho not looking in the direction of the action, a basic thing for defenders to do is for them to place their hands by their side when defending in the box – because anything that touches your arm, is more often than not going to be given as a penalty. That’s such a basic error to commit, which was punished. 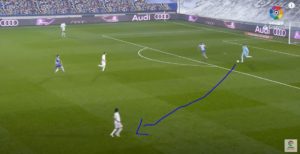 Look at the state of this. This came just after half-time, around the 48th minute mark, as Madrid were already 1-0 down, meaning everything Zinedine Zidane would have discussed, went straight out of the window because of carelessness and not being alert enough. Poor old Thibaut Courtois on a whole, doesn’t really deserve criticism because he saves Madrid at least twice a game, so he’s consistently good, but this error did unfortunately come from the Belgian. The position he’s in, common sense would indicate that Marcelo is the free-man, and the simple pass to make, the Brazilian is the outlet. If Courtois wanted to be brave, then fine, do a little turn which would be safe enough as Lucas Perez isn’t closing down that quickly, so you can then pick out Varane with a right-footed pass. What does Courtois do? He goes straight down the middle, passing it straight to Joselu who had an empty net to score into. 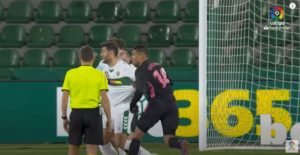 On Wednesday, Carvajal decided he wanted to wrestle Antonio Barragán inside the box, directly in front of the referee’s eyes. What was going through his mind when he decided that was the right way to begin the second half when your team is winning 1-0? I’ll leave that for you to ponder and stress over.

Perhaps the Elche match could have been different, had Zidane not waited so long to make his substitutions, which I felt were about half an hour too late with regards to Marco Asensio, Lucas Vazquez and Marcelo. But even then, there were enough chances to win the game, Ramos missed a chance from point-blank range, Carvajal was denied by a great save, and Karim Benzema glanced his header wide when it looked easier to score just before stoppage time. My point is, if chances are being created, and not a few, Madrid created enough against Cadiz, Alaves and Elche to win, there were at least four clear-cut goal-scoring opportunities in each game, which were fluffed. Crucially, the mistakes happened, and that can’t be on Zidane. There’s no way anyone can convince me that Zidane is responsible for the silly positional and errors in judgement which I’ve highlighted above. Let’s assume Atletico win their two games in hand, that puts them eight points ahead of Real, who have dropped eight points against three teams which Atletico will probably have beaten at a canter once they’re done with Alaves on Sunday.

These are the games which swing title races in your favour, and if the above three games are anything to go by, Madrid will only continue to slip-up against teams which they have a superiority complex against. And don’t even get me started on the Valencia game. Los Che aren’t a good team, they’ve won once in their past 12 La Liga fixtures, losing six of them, but guess who that win came against? Real Madrid, who that day were extra generous, gifting Carlos Soler three penalties, and Varane also scored an own-goal for added good measure in a 4-1 defeat to a poor Valencia team.

There is some potentially good news though, and that’s what MARCA’s Jose Felix Diaz reported today, that Bayern Munich’s versatile defender is closing in on a move to Madrid, and that the transfer might actually be completed as early as next week.

The Austrian would move on a free-transfer, with his contract expiring in June 2021. But as I discussed in my column on the 28-year old back in November, I still find it strange that a man of his experience would settle for a secondary/squad role, when he could be a starter at another top European team.

Also, Madrid are currently engaged in negotiations with their legendary captain Ramos over a new contract. If the latest reports are to be believed, the club aren’t willing to totally accept the Spaniard’s terms. The 34-year old remains a crucial part of the team, and quite frankly, the team can’t defend in big games without him. So forgive me for being skeptical for now, perhaps Alaba is a smokescreen or a back-up plan in case Ramos does actually leave the club on a free in June? Which is worrying.

Let’s just hope Ramos does renew his contract and Alaba arrives for free too, because if he has accepted a sporadic squad role at Los Blancos, then it’s a massive luxury for Madrid. Imagine signing a player who’s had almost 300 appearances for Bayern, having won 23 honours, which is likely to be even more by the time he arrives, to play the peak of his career at Real? That’s a player who you logically cannot turn down, particularly if you’re as financially hurt as Madrid are with Covid-19 and its implications.

While there are reports of Alaba arriving, Madrid are also apparently very keen on another left-sided defender, who plays for Sporting Lisbon. Nuno Mendes is one of the most sought after left-backs in Portugal right now, and the 18-year is impressive to say the least. Defensively sound, his contributions to the attack are what make him attractive, he’s a well-rounded player for someone so young.

But then, does it really make sense? Manu Sainz from AS reported Madrid are keen to activate his €25 million clause, but that’s contrary to what the Portuguese press believe, who have revealed Sporting increased his release clause to €75 million when they extended his contract until June 2025.

So now, you have Madrid, a club struggling for cash to the extent that they can’t provide the necessary players which Zidane has asked for, for him to be able to do his job properly. Instead, this club is tracking a teenage left-back, who don’t get me wrong could be an incredible addition, but with Ferland Mendy already there, and Miguel Gutierrez in the academy available for free, and Alaba potentially arriving too, what’s the point of tracking Mendes? Wouldn’t it make more sense to sign a right-back who Zidane can trust, to replace Alvaro Odriozola in the squad, and to cover the frequently injured Carvajal?

Many decisions the club has made in the past two or three years have made zero sense to me, and so, anything is possible at this stage. It’s all a bit inconsistent and ludicrous, from the errors in the boardroom to the errors on the pitch, Real Madrid really need to stop fooling around in 2021.