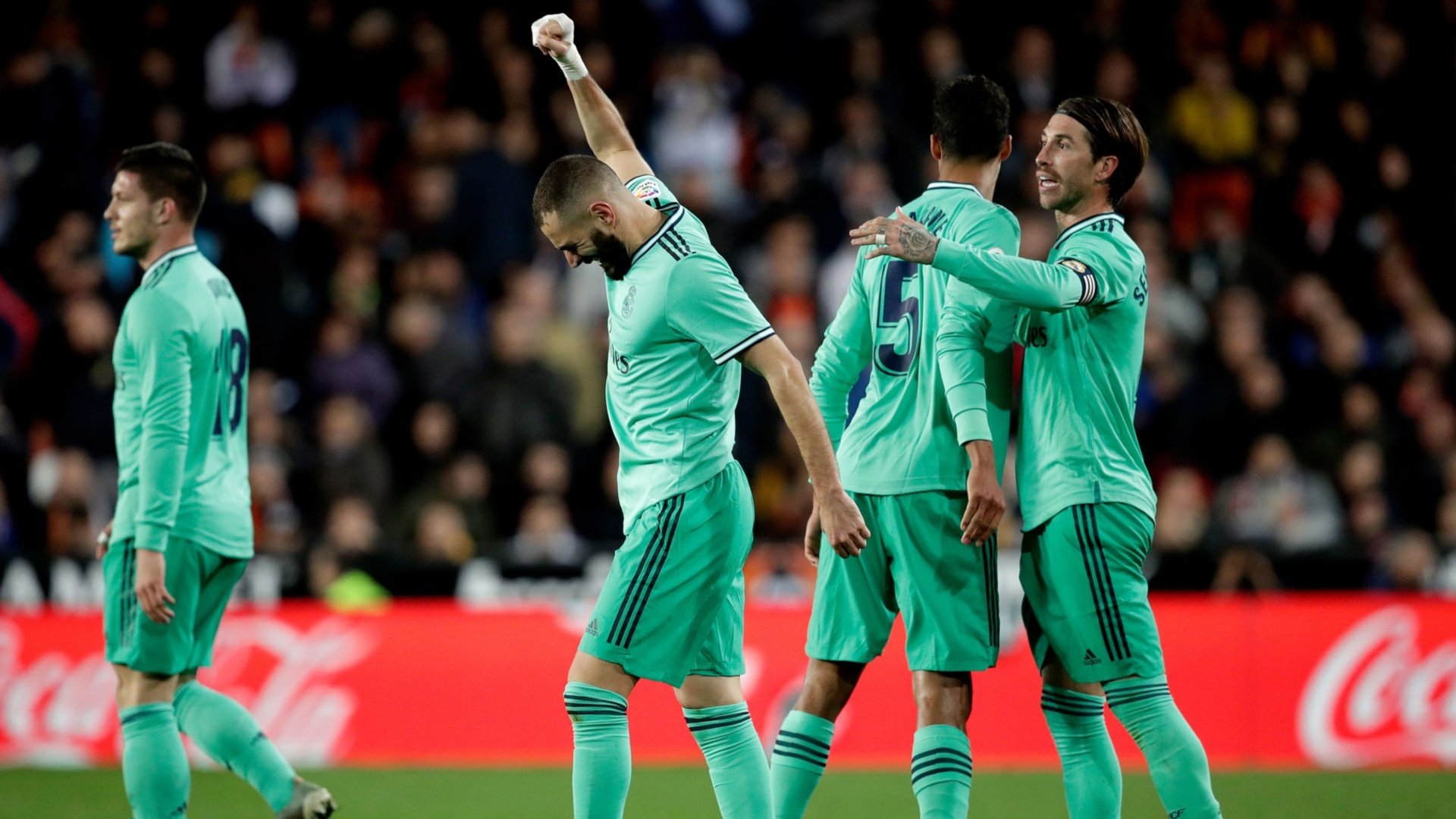 Valencia and Real Madrid produced one of the most enthralling La Liga contests of recent times that included Real Madrid’s goalkeeper flying into Valencia’s box in the 95th minute. Sit tight and let’s dive into our post-match report.

Zidane took the cautious route and benched Casemiro to save him for the Clásico. Modric, Kroos, Valverde, and Isco formed Madrid’s midfield while Nacho was the surprise pick at left-back. The versatile defender has played at this position many times before but he had just returned from a lengthy injury. Rodrygo joined Benzema in the attack.

Valencia went with the 4-1-4-1 formation but Jaume Costa started at right-back while Daniel Wass was sent further up to the right-wing. Rodrigo Moreno was the sole Valencia striker upfront with a barrage of quality midfield options in behind him.

Madrid pressed high in the initial minutes of the game and Modric was joining the press, very deep into the Valencia half. Isco was mostly operating from the left half-space but there was close to little combination for him. He was the Madrid midfielder with the least amount of touches (36) in the first half.

Madrid was enjoying plenty of possession to frustrate the 44,000 Valencia fans inside the Mestalla. Madrid’s first shot of the game came from Fede Valverde, who was operating in a deeper position tonight, cloning the role of Casemiro. Benzema set the Uruguayan up for a shot from the edge of the area but it was saved by Domenech. Modric kept pressing high and Valverde was the deep anchor for Madrid during these early minutes of the game.

Just after 10 minutes, Rodrygo started to swap roles with Isco and the Brazilian starlet created some attacking moves in combination with Dani Carvajal from the right. Valencia slowly started to get back into the game with some possession. Rodrigo Moreno was very much the focal point of their attack but Carlos Soler and Ferran kept the Real Madrid defense on their toes. However, Real Madrid looked solid at the back as Sergio Ramos pretty much swept away anything that came close to him. Nacho was also doing very well defensively on the Real Madrid left flank.

Domenech denied Kroos around the 12th minute when the German drove it from distance around the first quarter of the hour. Nacho provided a great cross towards big Benz soon after which was met by Benzema but it went wide of the goal.

Real Madrid also missed a chance through Benzema after Modric did his best to pass the ball despite falling down but the move didn’t end in a goal.

Valencia hit Madrid on the break with Ferran Torres running straight into the box. Varane did well to stay with him all the away. Ferran made a nice turn and but his shot was too weak for Courtois. Soon after, Modric and Benzema created a brilliant one-two move around the Valencia box but the move didn’t produce anything for the visiting side.

Madrid’s main attacking agenda surged from the right flank and with its continuation, Carvajal fed a good cross to Rodrygo who couldn’t finish it properly. Karim Benzema surprised Valencia with his deep runs back into Madrid’s half to win the ball on multiple occasions.

Madrid conceded two dangerous free-kicks back to back around the 25th minute after fouls from Valverde and Carvajal on Parejo and Soler, respectively. Valencia were trying to stretch the field wide but Madrid countered this with the help of Isco and Rodrygo. Both of them were chasing ball carriers in both the flanks. Ferran Torres missed a header on the 36th minute. Madrid didn’t deal with it very well but the crisis was averted anyway.

Two Valencia players – Soler and Wass picked up Yellow card near the end of the half but the referee canceled Wass’ booking as his initial call was a mistake.

Valencia almost scored in the opening minute of the second half after Sergio Ramos slipped. Ferran carried the ball once again but Thibaut Courtois made a tremendous save by making himself big in front of Ferran. Both teams settled a bit around the 50th minute and started to look more cautious. Valencia gradually started to enjoy more possession as well but neither team looked threatening enough to break the deadlock.

Valencia brought in a striker for a defender when Vallejo replaced Costa to add to their attack. Madrid made two changes together as Rodrygo and Isco were taken off for Bale and Vinicius. Against the run of play, Valencia won the ball in the 78th minute when Nacho missed a header. It was a breathtaking counter-attack which found Soler at the end of it. He made no mistake to open the scoring for the home side. The fans went wild!

Real Madrid were in no mood to give up. They brought in Luka Jovic for Luka Modric, late into the game. Valencia was comfortably dealing with any surge Madrid made into their area. Bale won a free-kick, very close to the goal but the Welshman couldn’t convert the chance into a goal. Real Madrid were looking at a disappointing 1-0 defeat. But hold on! Thibaut Courtois wasn’t done with the game just yet.

The 6’6′ goalkeeper came up to the Valencia box for a corner in the 95th minute. The curling cross from Kroos found the Belgian too. His Cristiano Ronaldo-esque header was blocked but he held his ground to made sure the ball reaches Benzema. The Frenchman blew the roof of the net away with a venomous finish and it was 1-1! Fede Valverde could be seen punching the air and hitting the ground in pure joy while his teammates went for a wild celebratory run.

This wasn’t the result Madrid wanted but how it ended was something Real Madrid can definitely take to the Camp Nou in three days. Next up, it’s EL Cláscio!