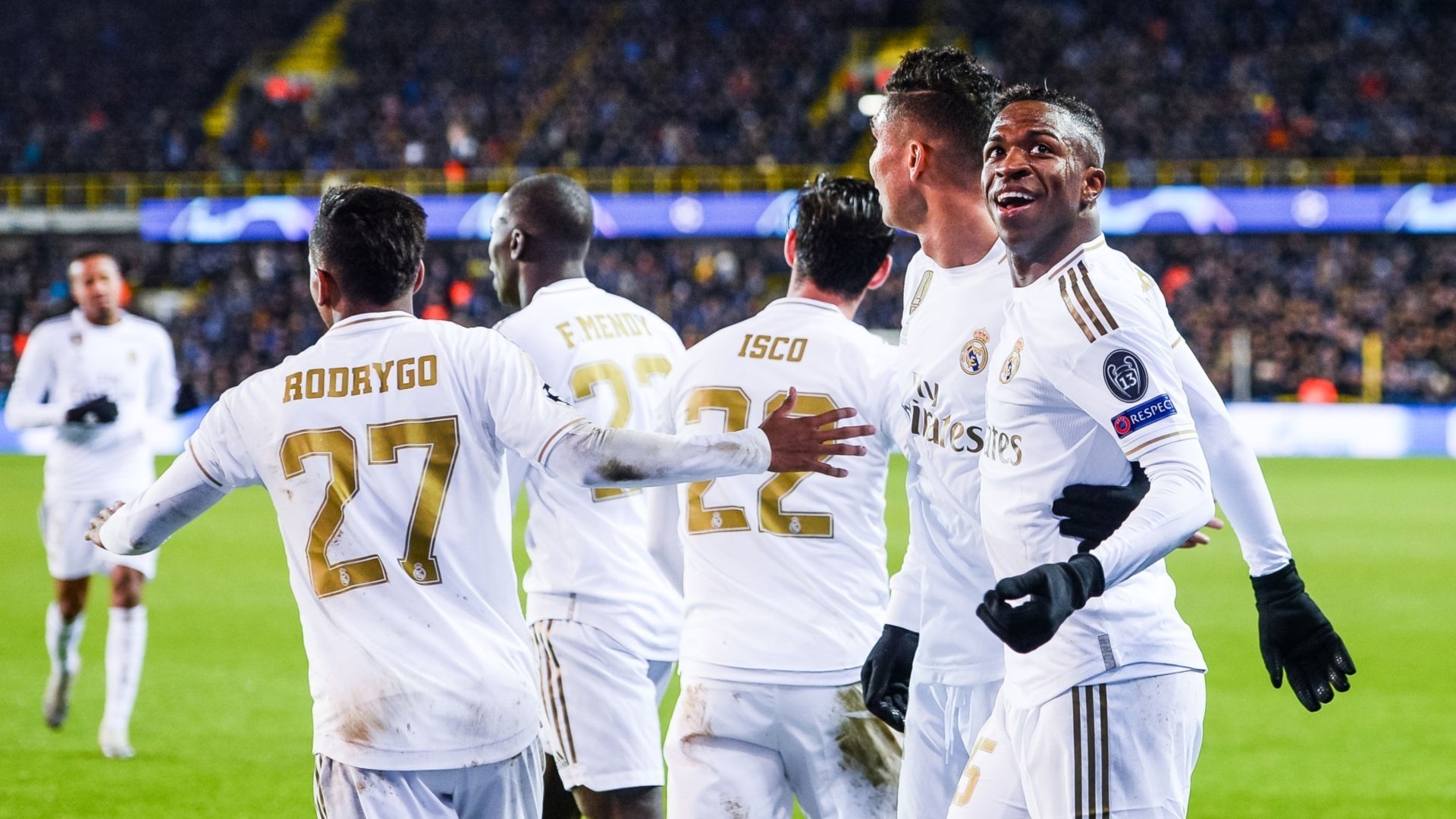 Los Blancos ended the group stage of the UEFA Champions League with a comfortable 1-3 win over the home side Club Brugge in a rainy affair in Belgium. Real Madrid needed to get this fixture out of the way without any trouble as they set their eyes on a potentially season-defining seven days in La Liga now.

As expected, Zidane rested a lot of his regular players for the game. Raphael Varane led the team in absence of Benzema, who came on from the bench in the final quarter of the game. Odriozola, Militão, and Jović were the three players who needed this game very badly. Vinicius Jr. and Rodrygo occupied the two wings around the Serbian while Modric, Isco and Casemiro formed a rather strong midfield for Real Madrid.

Real Madrid dominated possession early on as Brugge tried to implement a long-ball strategy. Casemiro was joined by either Modric or Isco to create a mini-line of their own in both halves of the pitch. Ferland Mendy was trying to make under-lapping runs with Vinicius in the far-left. Both teams struggled to find their discipline but Jović hardly got any touches in the opening few minutes. Modric was the first man to get into the referee’s books after he fouled Dennis on the 6th minute.

Brugge gave Real Madrid a real scare on the 11th minute after Sobol put in a dangerous cross in the box which was deflected in the direction on Tau. He stuck his foot-out to send the ball towards the net but Areola made an impressive save with his boots. Balanta became the first Brugge player to be booked after a challenge on Casemiro around the 15th minute.

Casemiro danced deep into the Brugge half and allowed Vinicius to pass the ball towards Jović, who was moving towards the left. The Serbian placed a well-timed shot with his left foot but Mignolet made a very good save to deny him. Real Madrid came close to scoring again after the half-hour mark when Isco dribbled across the box to shoot but his effort was inches away from the goal. This was rather frustrating as the goalkeeper was already beaten. Dennis almost sent the home fans into a frenzy when he found the net, very late into the first 45 minutes but the officials consulted with VAR to rule out the goal.

Neither side made any changes to the line-up to begin the second half. Club Brugge started the second period on a strong foot. Odriozola blocked Vanaken’s effort from a volley but Tau made another effort from the rebound but failed to open the scoring on the 46th minute.

Finally, Rodrygo put the away side ahead on minute 53 with a fine volleyed finish from the edge of the box. Luka Modric’s pinpoint pass found Odriozola on the right flank. The Spaniard’s cross was deflected but it found Rodrygo anyway. The Brazillian was prepared and acted promptly to make a great finish with his weaker foot.

It took Brugge just a minute to get back into the game. Militão lost the ball after he failed to pass the ball across the pitch, towards the right flank. It was a dangerous position to loose the ball. Dennis muscled his way through to the Real Madrid box and passed it to Hans Vanaken who calmly put it past Areola to equalize.

Real Madrid tried to get their rhythm back after conceding and pressed hard to find another goal. Vinicius and Rodrygo were cutting inside and drifting wide in phases to create as many chances as they could. Finally, Madrid got their second goal, this time from the other Brazilian starlet. Rodrygo was involved in the build-up this time. The scorer of Madrid’s first goal tried to give a back-heel pass to Vinicius but he missed the ball. But Vinicius got the ball anyway from a deflection and poked it home with ease. Madrid regained control of the game.

Brahim Diaz was Madrid’s first change as Vinicius made way for the Spanish winger. But Brahim was mostly seen operating from a deeper position, in the middle of the pitch. He looked a bit sluggish as he kept losing the ball. Benzema and Valverde were Madrid’s final two changes as Jovic and Isco made way for them.

There were some strange decisions from Zidane and they raised quite a few questions. Why didn’t Nacho and Bale get any game time at all? Does that mean Carvajal will start at left-back against Valencia? Why did Casemiro play full 90 minutes of such a fixture? Is he going to sit out the Valencia game? Only time will answer these questions.

Real Madrid nailed the final pin on Brugge’s coffin when Luka Modric scored from outside of the box yet again after Casemiro found him on the edge of the area. Real Madrid will definitely be content with a solid performance overall but everything is still not quite sorted before two huge games during the next seven days.