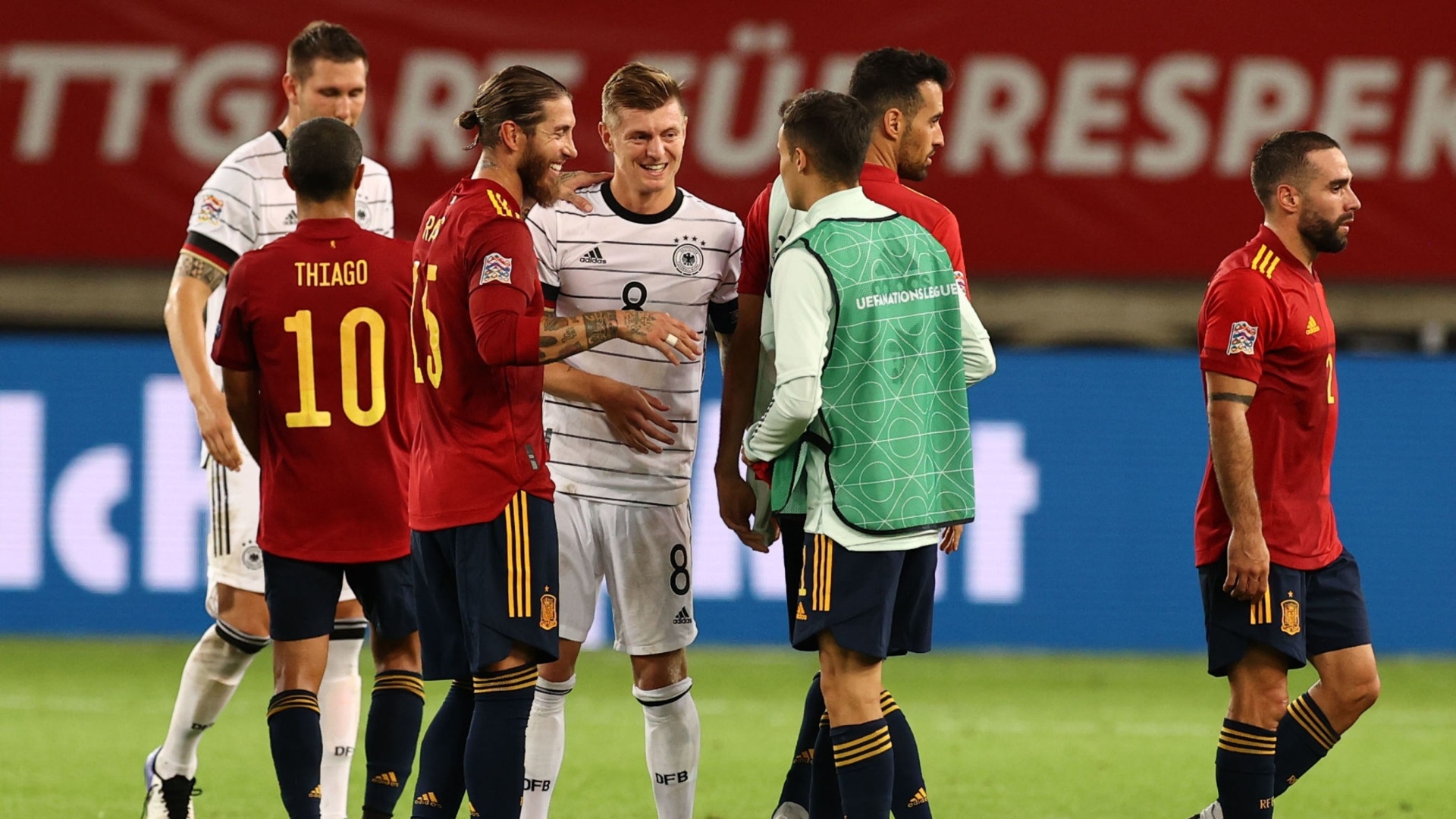 Real Madrid had a number of players in action on UEFA Nations League duty on Thursday night.

Sergio Ramos, Dani Carvajal and Sergio Reguilon were in the Spanish camp to face Toni Kroos and Germany, while Luka Jovic would have been looking for an opportunity to impress his club on duty for Serbia against Russia. Gareth Bale was in action for Wales as they took on Finland, and would Madrid’s second goalkeeper Andriy Lunin have some minutes against Switzerland for Ukraine?

An exciting contest, which had plenty of moments in the first half. Ramos and Carvajal stood out for Spain, Timo Werner was put through on goal by Leroy Sane, but Madrid’s captain did well to force Chelsea’s new striker wide, who’s eventual shot landed in the empty stands.

But it was Werner who scored the opener, a shot which blinded David De Gea through a group of players as the Germans went into the break ahead. There were similar patterns in the second half, as Joachim Low’s side played on the counter, and were in again early on.

Ramos and Carvajal got lucky, both were sucked in by Julian Draxler, before the Paris Saint Germain midfielder freed up Sane, who almost squared it on a plate for Werner. Kroos was effortlessly controlling the tempo for Germany, the midfield maestro playing left of the pivot and getting plenty of opportunities to join in on the attack, had a pop from distance on the hour mark which was awkward for De Gea.

The lung-busting runs from Carvajal were less apparent, but his role was crucial, and when Spain did have the ball in the back of the net, Madrid’s right-back, who combined with Fabian Ruiz, was stood in an offside position when he received it back from Ruiz, therefore rendering his pass to Rodrigo who tapped into an empty net was rendered meaningless for La Roja.

A nice diagonal from Kroos found Thilo Kehrer in acres of space, who was then fouled by Jose Gaya. From the resulting free-kick, Kroos put it on the head of Nicolas Sule, who’s head forced a smart save from De Gea, who was definitely the busiest of the two keepers throughout the contest.

And Spain’s constant knocking at the door was eventually rewarded. Long after the four minutes of added time were completed, a goal made in Valencia arrived. Rodrigo put it on a plate for Gaya from close range, after former teammate and now Manchester City player Ferran Torres played in a lovely standing up ball into the box for Rodrigo.

No minutes for Reguilon, who remained an unused substitute for Luis Enrique.

Madrid forward Jovic was unfortunately also an unused substitute as Serbia were comfortably beaten by 2018 World Cup hosts, Russia. A brace from Artem Dzyuba either side of Vyacheslav Karavaev’s strike cancelled out Aleksandar Mitrovic’ goal for Serbia, who was selected ahead of Madrid’s 22-year old forward.

Having been brought back to be Thibaut Courtois’ understudy at Madrid this upcoming season, the chances of Lunin getting minutes is looking likely to be in cases of injury or rotation. The youngster was watching from the bench throughout this contest, as Oleksandr Zinchenko grabbed the winner for Ukraine, after Haris Seferovic had earlier cancelled out Andrii Yarmolenko’s opener.

Wales managed to secure the three points without star man Bale, who had been replaced at half-time with what appeared to be a thigh injury. Throughout the half though, Bale had been largely anonymous for the Dragons, a performance which paints a dark picture statistically, as he made zero key passes, crosses, long balls and had zero shots on target, losing possession 10 times. Kieffer Moore scored the winner with 10 minutes left on the clock, giving Wales an ideal start.

Sergio Ramos has reportedly reached an agreement with Real Madrid