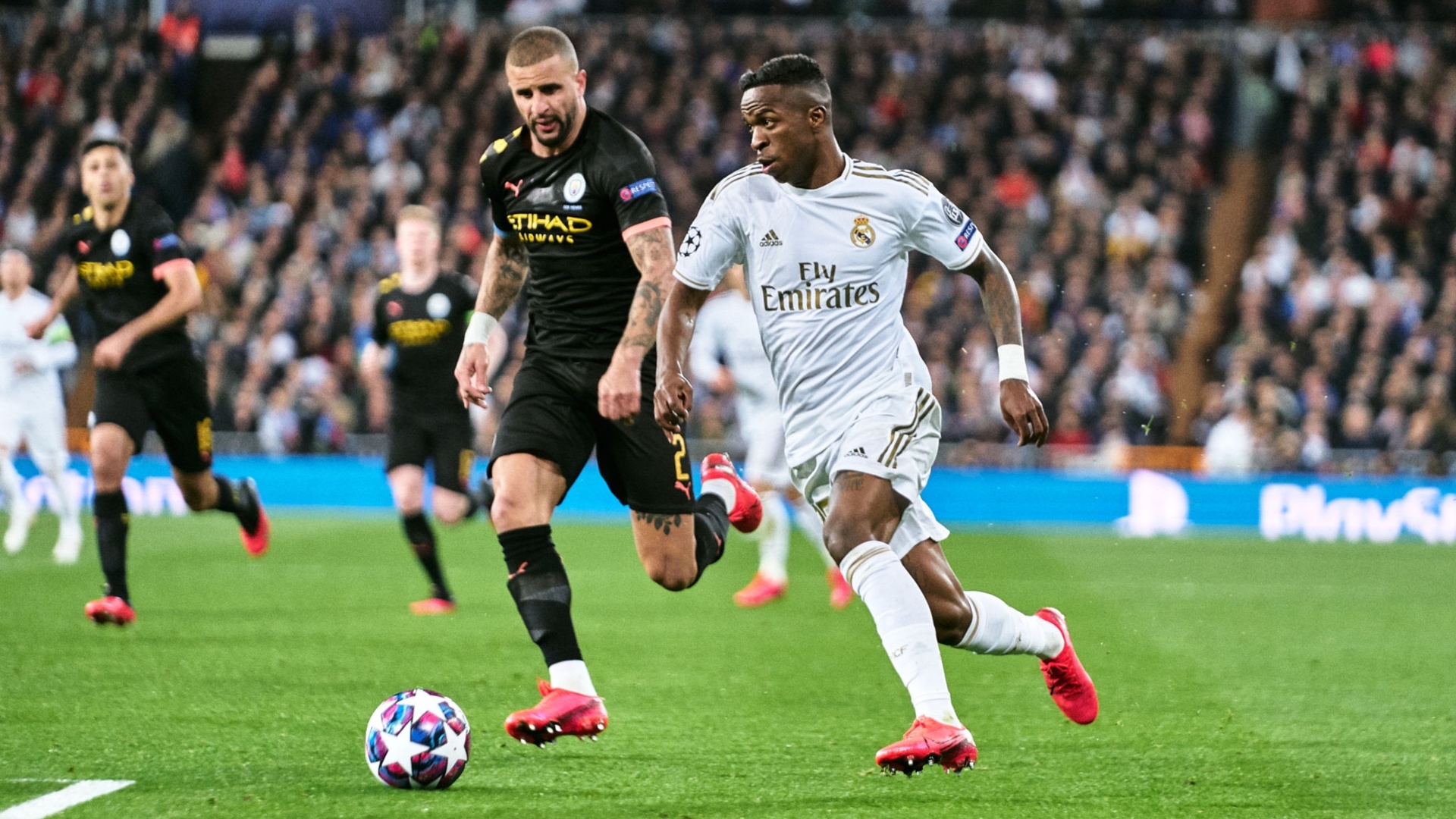 Having won 10 out of 11 finals to seal their 34th La Liga title after the global lockdown, almost a month later, another final looms for Real Madrid. Tonight at 21:00 (CEST), Zinedine Zidane’s side face Manchester City in the second-leg of their UEFA Champions League round of 16 tie, and will be looking to overturn a 2-1 aggregate deficit. It’s tough to believe that the end of February was the last time these two sides met, and this game could have a different complexion to it from the first leg at the Santiago Bernabeu. Real took the lead through Isco on the hour mark, in what was a cagey affair up until the opening goal, but that sparked a response from the visitors. With the run of play, Gabriel Jesus won a duel in the air with Sergio Ramos, to head in the equaliser, although, Madrid’s captain was appealing for a foul, in what may have been awarded too, had it been another referee. Then the hosts fell apart, a penalty conceded by Dani Carvajal seven minutes from time, gave Kevin De Bruyne the chance to double City’s lead. Already two away-goals down, it got worse for Madrid, when Jesus broke through and was in on goal, forcing Ramos into a last-ditch challenge, resulting in a red card. And that’s exactly why tonight’s contest sees the Spanish champions coming into this as very much second favourites.

The hosts are in good shape, but will have to do without club record goalscorer Sergio Aguero through injury, and Benjamin Mendy through suspension. Otherwise, Pep Guardiola will have plenty of options to call upon. In contrast, Real are without Ramos, while Gareth Bale, James Rodriguez and Mariano Diaz have been left in Madrid. Zidane answered questions about Bale’s exclusion from the squad in his pre-match press conference, and the Frenchman claimed it was the Welshman who chose to not travel with the team. There are question marks over Eden Hazard’s level of participation, as well as Marcelo, both players who missed the final few games of Madrid’s La Liga run-in through injury concerns. Reports in Spain suggested Hazard is still feeling discomfort in his ankle, following surgery, although Zidane echoed that the Belgian is in good shape. Hazard, like Luka Jovic who also makes the squad, are both presented with a big chance to make a statement, after debut seasons to forget for both forwards.

Form after the lockdown

Man City have had an indifferent season from their all-dominating domestic campaign of 2018-19, when they won all four trophies available to them in England. But this season saw them finish 18 points behind eventual champions Liverpool, which is deemed as a failure for a team of this depth and quality.

Guardiola’s men smashed Norwich City 5-0 in their final Premier League game, and although they’ve been full of goals since the resumption of football, they have lost three games, which shows this contest is far from a certainty. Those defeats came against Chelsea (2-1) and Southampton (1-0) in the league, and a FA Cup semi-final loss against Arsenal (2-0) – although none of them came at the Etihad Stadium. At home, City are a different animal – and from their 26 home games in all competitions this campaign, they’ve scored 76 goals, and conceded only 18. And since the lockdown, they’ve only conceded once at home in six fixtures, including a clean sheet against Liverpool, scoring 24 times in the process. In fact, they’ve played 12 games in all competitions since returning to football, and have only conceded six goals – highlighting the challenge for Madrid, who aren’t exactly breaking records in front of goal.

Madrid’s post-lockdown strength is evident though. Zidane’s men won 10 La Liga fixtures in a row to clinch the title, and managed to overturn a two points deficit to Barcelona in the process. Their most recent fixture was after the league was won, and was a 2-2 draw away against Leganes – and since then, Man City have played two games. So whether that favours the English side, or the Spaniards, remains to be seen. Madrid’s post-pandemic form reads 21 goals scored in 11 games, and six goals conceded, and they’ve scored eight goals in five games away from home.

This could be decided between two men in the center of the park – De Bruyne and Luka Modric. The Belgian has been a superstar for the Citizens, and arguably deserved to win the award for the best player in the Premier League. De Bruyne enjoyed his best season in Manchester, scoring 15 times and registered 23 assists, 20 of them coming in the league, as he equalled Thierry Henry’s record of assists dating back to the 2002-03 season. He makes things happen for City, not only is he a leader on the pitch, but he leads by example, and is capable of hurting Madrid in so many ways: be it with long range shots, from set-pieces, or simply with his exceptional vision to see passes which most don’t.

The same can also be said about his rival tonight, Madrid’s midfield maestro, Modric. The Croatian looked almost certain to leave the club this summer, but his post-pandemic form has seen him reach a new level, and Modric played a huge role in Madrid winning La Liga. His experience will be crucial to Real’s chances, his know-how of playing out nervy contests like this, his in-game management and his opening up of the opponents need to all come to the fore tonight if Madrid are to stand a chance.

How both teams could set up

With Zidane, anything is possible. He likes to throw a spanner into the works to disrupt the preparation of the opposition, and there is a chance we could see Marcelo starting as left-back, which is only more likely if Zidane opts for five in midfield. But the issue he could face with five in midfield, is that despite the control in the middle, Madrid might not cause City too many issues behind or between the lines.

Zidane emphasised the need for goals, and therefore he’s likely to go with a 4-3-3, with two natural wide-men, either Vinicius Junior or Marco Asensio will play on the right, and Hazard is likely to take his place on the left-wing, next to Karim Benzema. Toni Kroos was surprisingly an unused substitute in the first leg, which raised questions about Zidane’s selection, the German will likely sit next to Casemiro and Modric in his go-to midfield trio, with Madrid hoping their experience and intelligence wins the battle.

Guardiola has had a tendency to overthink crucial Champions League starting line-ups, but he got it spot on in the first-leg. You can expect him to go with a flat-three in midfield too, with the right-winger coming in to support the midfield when defending, to make it a flexible 4-4-2, while a 4-2-3-1 when attacking, with De Bruyne having the free-role to roam and influence the game across the pitch.

The key question for Guardiola is how he lines up defensively? Kyle Walker and Aymeric Laporte are definitely starting, but will he go for Joao Cancelo at left-back as he did against Norwich on the final day of the Premier League, or will he go with a more rouge and unexpected choice? And it still remains to be seen who partners Laporte, will it be Fernandinho, or will it be Nicolas Otamendi?

All competitions form coming into this game

Madrid can’t really afford this to be a cagey affair. They need to come out of the blocks as a team possessed, Zidane’s side will need to score the opening goal very early in the first half, and if they concede first, the tie is well and truly over. One factor which no one seems to be talking about is the time between both legs, which could favour Madrid. There’s a real feeling of unexpectedness and mystery about this clash, and Madrid being Madrid in the Champions League, they won’t fear the test of City, especially as it’s without their home fans. Put simply, if you need one club in the world, and one head coach to lead a comeback like this, then it has to be Los Blancos and Zidane. The game is going to be really open, and because Madrid have nothing to lose, it could work in their favour – Zidane’s unbeaten knockout round record is on the line, and the players will give everything to keep that in tact.