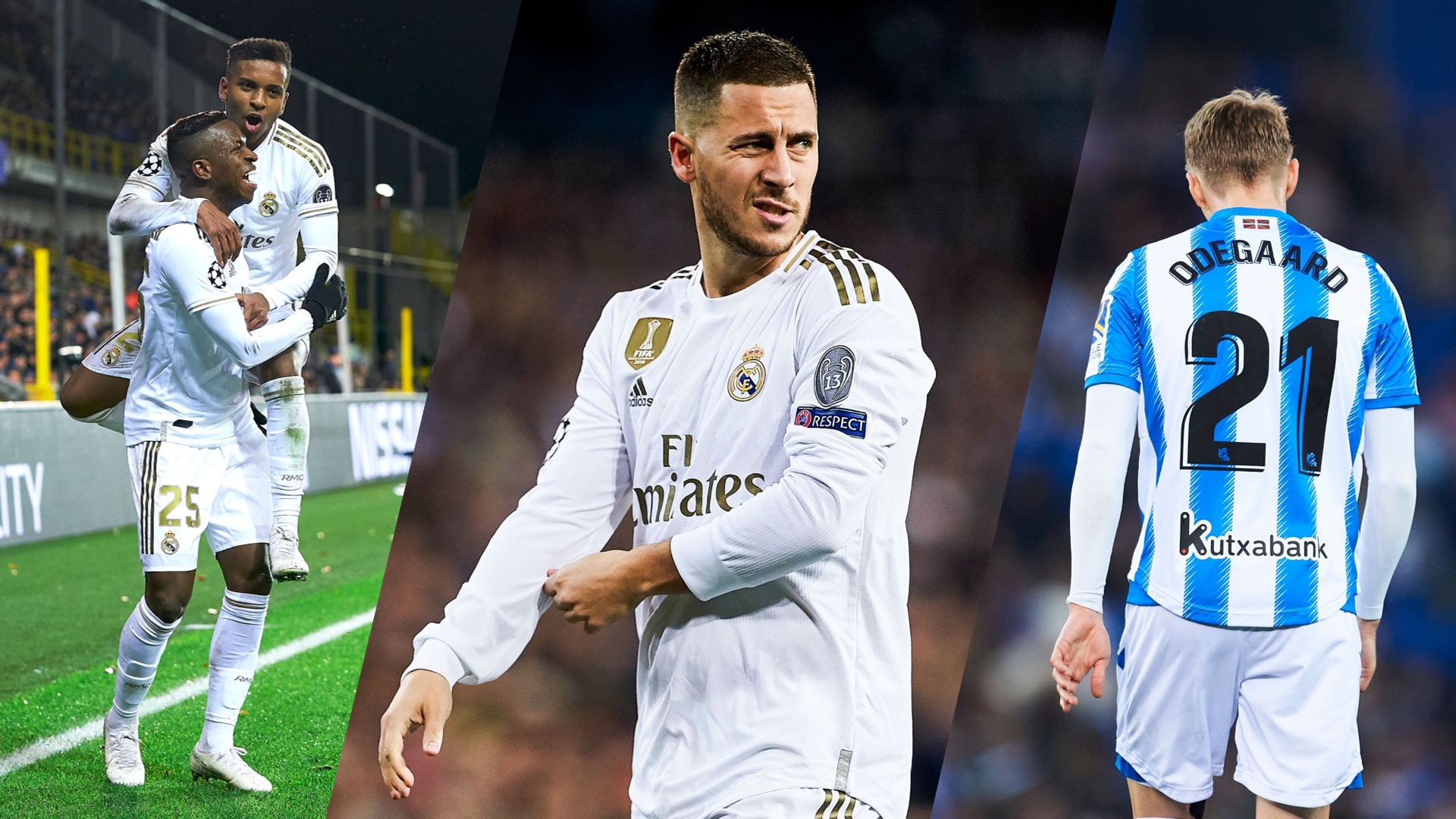 Excitement continues to build ahead of the 2020-21 campaign. Real Madrid will be looking to hit the ground running and remain consistent throughout, as they defend their La Liga crown.

But that task could well be made easier for Los Merengues, who’s perennial and closest rivals Barcelona are going through a turbulent time. The Catalans are facing unforeseen circumstances, with captain Lionel Messi reportedly close to leaving the club, in a transfer case which could lead to a court battle.

The Argentine has more often than not been pivotal in Barcelona’s domestic dominance over the last decade, and his sudden and shock departure could be the catalyst for Madrid to begin their own stranglehold of the league crown. The last time Los Blancos clinched back to back La Liga titles was when they won in 2006-07 and 2007-08, but that preceded a forgettable phase for Real, as the Blaugrana went onto win eight of the following 12 league honours available to them. To dominate, you need a range of things in your favour: from luck, to a plan, from a hungry core to an ever-developing squad, which allows for consistency at the highest level over a sustained period of time.

And so, I’ve picked out three things to be excited about as Madrid attempt to go two from two in the Spanish top flight this decade:

A full season of Eden Hazard

The Belgian had a debut season to forget, after initially arriving at the club overweight and ill-prepared, ultimately meaning he was unable to make a sudden impact after his transfer. It took time for him to integrate into the team, and other than glimpses, he truly arrived in November, more specifically against Paris Saint Germain. I was fortunate enough to be at the Santiago Bernabeu that evening, and Hazard totally ran the show. He was decisive in key transition areas, he was the man Madrid looked to feed, and so he consistently evaded the PSG press. Hazard made the first hour of that clash very uncomfortable for the Ligue 1 side, and his unfortunate injury then led to errors and a lack of control as the hosts blew a lead. But the 29-year old will know this is the season he has to make his impact, and he owes not only Madrid fans, not only Zinedine Zidane, but he owes himself a memorable season in which he spearheads a campaign laden with silverware. His impact is quite clear, Madrid are a far better, creative, and dangerous side in attacking areas with him on the pitch, and his connection with Karim Benzema was beginning to look juicy, up until the regular inferences. A full season of Hazard is certainly something to cling onto, it’s not hope, it’s a reality – if he stays fit, the club and its fans will enjoy a lot next season.

Vinicius and Rodrygo: One season wiser

The Brazilian pair, both arrived at the club as projects, but special players who Madrid couldn’t allow to join their European rivals. In Vini’s two seasons, it’s safe to say he has been our best wide player since Cristiano Ronaldo’s departure. The former Flamengo player came in and became the spark in his debut season, providing so many memorable moments in an otherwise depressing season. In his second, it was more of the same, Vini continued to show he is a big game player and capable of excelling as a starter for a very long time. I’m excited to see him in his third season, unfortunately, his starting position isn’t guaranteed because of Hazard, but I would appreciate Zidane acknowledging the need of somehow getting both Vini and Hazard into one starting XI. Madrid’s weakness is what their attackers aren’t doing at the business end of the pitch, that’s why Zidane needs to cash in on having his two most effective and dangerous wide players on at one time. I feel as if this could be Vini’s major breakout season, during which he begins scoring freely and continues causing chaos among opposition defensive lines, he’s a weapon capable of destruction, and so I hope he not only gets plenty of chances, but he is enabled by Zidane to become the player his talent promises.

On the other hand, Rodrygo Goes has gone through a vast transformation since the end of the season. The teenager, who got the nod ahead of both Vinicius and Marco Asensio in the UEFA Champions League second leg against Manchester City, did make an impact during the game as he delivered the assist for Benzema’s equaliser, but the issue with Rodrygo has been his unwillingness to do what he is clearly capable of. Rodrygo is a natural winger who enjoys taking players on, accelerating past them and scoring goals, but unfortunately, he struggled to do that in his first season. For me, it’s down to two reasons; firstly, he’s playing on the right when his favoured positions are the left and as a number nine, and secondly, perhaps he has found Europe more physical than he initially expected, and hence, has decided to improve his physicality. I’m therefore excited to see how he progresses this season, because with this added physicality, there is a chance Zidane uses him as a nine, to accommodate Asensio and Martin Ødegaard on the right-wing. But, it’s most likely a transformation to give him that added strength which a lack of, saw him pushed off the ball fairly easily this season. As long as it doesn’t ruin his agility and leads to injuries then it should prove to be a healthy change for both the player and the team. Ultimately, I don’t expect Rodrygo to have such a timid season again, but the one advantage he has is that Zidane evidently trusts him and rates him highly, which is something that he needs to use to drive himself on this upcoming season.

This is clearly the golden question, isn’t it? I am of the belief that Zidane had to revisit his midfield options after the Champions League exit, and after asking Florentino Perez if he can add to his midfield by dipping into the transfer market, he was probably asked to use the resources that the club already have – hence the return of Ødegaard and Dani Ceballos. But both players were supposed to be playing elsewhere next season, so why the sudden shift in plans?

Zidane has recognised the need for more creativity in the middle of the park, something which was overwhelmingly obvious last season. Madrid just weren’t creating enough chances, and were also heavily reliant on the left-side of the pitch – enter, Ødegaard.

Firstly, above, look at the areas in which the Norwegian primarily functioned in at Real Sociedad last season. Dani Carvajal was often the only attacking player on the right, and rarely did he make successful overlapping runs, more so, because he wasn’t able to. With Ødegaard playing on the right, this will allow him to feed the LW and ST with passes through the lines, and also combine with Carvajal and Alvaro Odriozola who will hopefully overlap a lot more frequently, making Madrid a more complete attack. 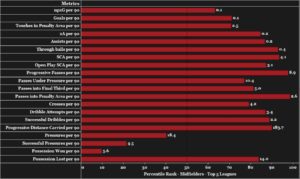 Above is a clear indication of why Zidane has recalled Ødegaard one year earlier than expected. His strengths lie in areas which Madrid lack, look at his: through balls, shot creating moments and his ability to create shot opportunities from open play. There is a constant theme here, the 21-year old evidently thrives in the final third, making his arrival in this team which needs a creative spark an absolute no-brainer.

Another nice element is his strengths with progressive passing, he’s always looking to make an assist or do something positive, rarely do you see Ødegaard dribble out of danger and then pass it back to waste an attack, he’ll always look for something. And the statistic which really stands out for me is the passes into the penalty area, because this is something Madrid fans have been screaming at their television screens for two seasons. There isn’t someone who floods the opponent’s penalty area with dangerous passes, which is why Paul Pogba was so sought after by Zidane. Usually from Ødegaard, these would be tearing through the defence to rip it open, or a pass with an angle on it, to a teammate making a run in-behind to break an off-side trap/low-block. The eyes of Vinicius, Benzema and Luka Jovic will be lighting up to have this type of delivery in the team, Hazard from the left, Ødegaard from the right, two players who possess a final ball which you could argue is only bettered by Messi.

And so Zidane really needs to focus on implementing a system which allows Ødegaard to thrive. The Frenchman simply can’t continue using the old-guard, Madrid needs dynamism, youth and fresh hunger in the team, just look at Bayern Munich, and above all, the forwards need Ødegaard. It’s usually fine margins which make or break a successful campaign, Ødegaard is that margin, I just hope Zidane knows.