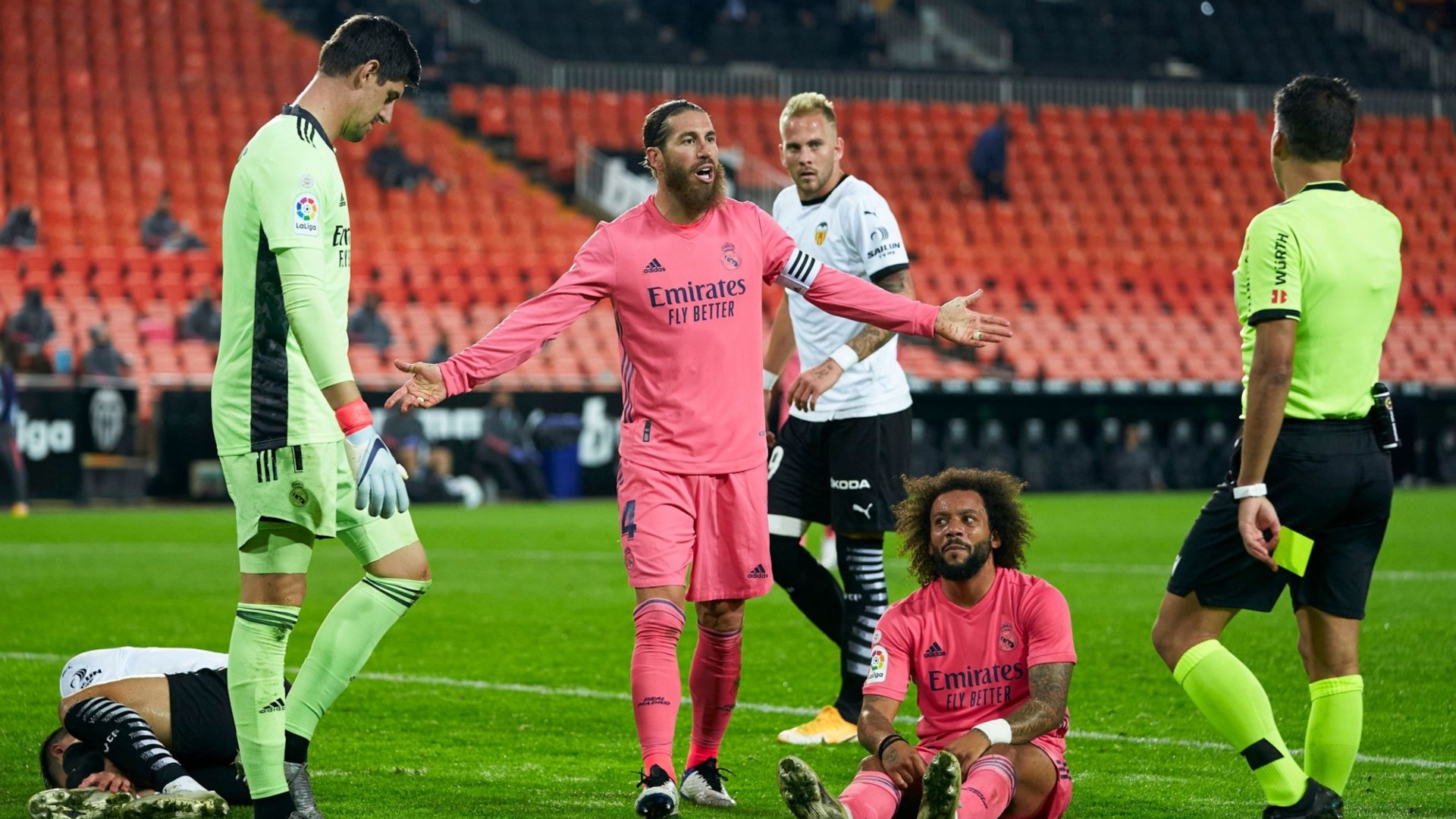 Real Madrid suffered their second defeat of the league season, losing 4-1 away at Valencia, a scoreline which doesn’t tell the entire story of a game which had drama, controversy and a constant theme.

The defending champions were the better team in the early phases, although both sides were comfortable and content in possession, in a contest that wasn’t cagey as it normally would be. Marco Asensio had the first attempt at goal, finding a rare patch of vacant grass before having a pop at goal.

Real were slowly growing, and began to look comfortable, and were deservedly ahead before the half half mark. Marcelo and Karim Benzema combined at the edge of the Valencia box, and as the Brazilian teed up Benzema, the Frenchman responded with a rifle into the top corner to give Madrid the lead.

But against the run of play, Valencia got a route back into it. Jose Gaya’s attempted cross into the box, struck Lucas Vazquez on the arm, a clear penalty awarded to the hosts, who couldn’t believe their luck.
Carlos Soler stepped up and had his penalty saved by Thibaut Courtois, then the Soler rebound hit the post, before Yunus Musah scores. But VAR showed that the 17-year old had walked into the box before Soler had taken the penalty, and referee Jesus Gil demanded it was retaken. This time Soler went the same way, and Courtois couldn’t keep it out, despite guessing correctly.

Moments before the break, it got even better for the home side. Asensio was fouled in the Valencia half, but nothing was given, and down the other end, a defensive mix-up led to Raphael Varane scoring an own goal when his clearance looped over a helpless Courtois. Madrid will look back at that decision as a controversial one, as Asensio was certainly fouled earlier in the move.

As good as Madrid were in the first half, and as much as they didn’t deserve to be behind, their intensity and creativity took a huge dive after the break, almost as if they had accepted their fate already.

Lee Kang-In was straight into the action, and after some very smart turns and dribbles, the youngster’s attempt from distance needed a Courtois finger-tip to push it onto the post. The warning signs were there, but Madrid just didn’t take any notice. And soon after, they were punished even further

Another penalty for Valencia just before the hour mark, after the ball was cheaply given away by Lucas and Asensio who both attempted to combine to clear the ball. Eventually, the ball was flashed across goal, and Marcelo tangled with Maxi Gomez in the box, again, another controversial decision, as these have been given as fouls in the defender’s favour in the past. Soler stepped up to make it 3-1.

Moments later, it was done as a contest. Varane again the initial culprit, but Sergio Ramos had an amateurish moment to forget which ultimately cost Real the penalty. The captain punched the ball away in the box while challenging youngster Musah, and Soler was on hand to gladly score a hat-trick.

With a quarter of an hour remaining, Benzema was brought off with what looked like a groin injury, so Zinedine Zidane will be sweating on that. But it’s ultimately an experiment which didn’t come off for Real’s head coach, who decided to rest Ferland Mendy and Toni Kroos for Marcelo and Isco.