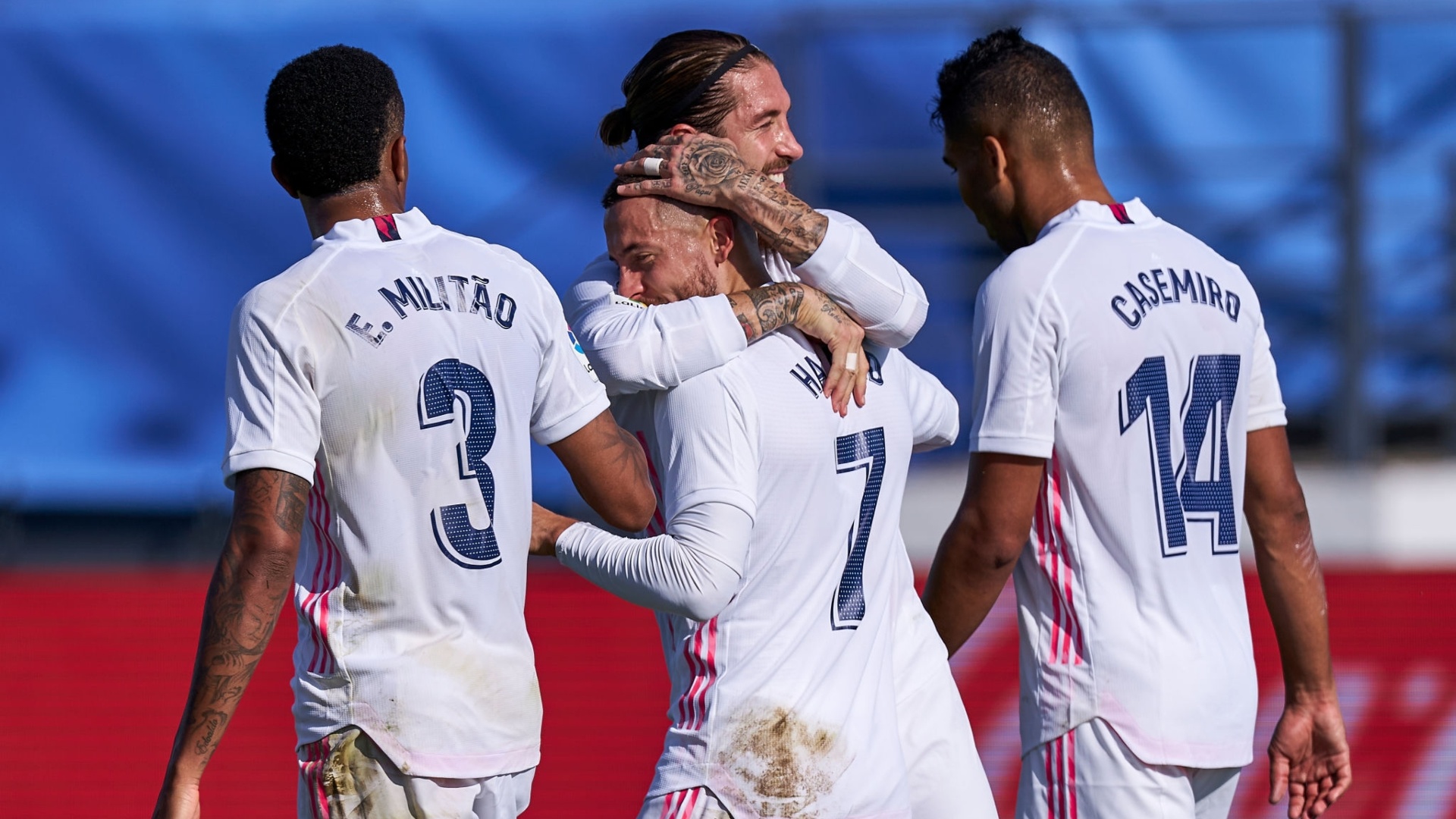 Real Madrid eventually got the better of a well organised Huesca side, beating them 4-1 at the Estadio Alfredo Di Stefano, to return to the summit of La Liga, in a confidence boosting victory.

With a potentially season defining four games following this contest, Zinedine Zidane used this match to recover the form and fitness of some key players in his squad. Raphael Varane, Ferland Mendy and Vinicius Junior sat out this one, as Eder Militao, Marcelo and Eden Hazard returned to the fold.

For the hosts though, it was a similar story to what’s haunted them all campaign, a lack of urgency, a lack of movement, and struggling to break down teams that are well organised in a deep block. And in fact, against the run of play, it was the newly-promoted visitors who had the first opportunity, as Rafa Mir beat Militao in a race before his shot at the near post didn’t give Thibaut Courtois much to worry about.

Marcelo then set-up Madrid’s first chance. Sergio Ramos stayed up from a corner, and the Brazilian tried to tee up his captain, who’s header forced a good save from Andrés Fernández. But then Marcelo went missing with his defensive duty, and that nearly hurt the defending champions. Javier Ontiveros crossed in from the right targeting Sergio Gomez at the back post, but the former Barcelona man couldn’t steer his shot on target, a solid chance to go ahead missed by the visitors.

Madrid just didn’t look likely to break down Huesca, until Hazard decided to take matters into his own hands. The Belgian popped into a little pocket of space with Fede Valverde picking him out, and Hazard then spun his marker before smashing a left-footed effort into the back of the net. His first goal for well over 300 days.

Before the half was up, Madrid were in again. Lucas Vazquez had been crossing unsuccessfully all game, but on this occasion, the make-shift right-back picked out Karim Benzema who controlled on his chest and rifled it past the keeper.

Madrid started the second half as they finished the first, with the upper hand, and as Huesca came out of their shell looking for a route back into the game, that allowed the capital club to counter, and they did. A nice back-flick from Marco Asensio to trigger the counter, before Hazard and Benzema combined, for the French striker to cross to the far post for Valverde who thumped it low and hard for 3-0.

Vinicius Junior came on to replace Hazard, who had a superb hour cameo on his first start back from injury, and the young Brazilian was in on the action immediately. Vinicius carried the ball from within his own half, riding several challenges, but his eventual pass wasn’t converted by Benzema who should have scored.

Huesca did get one back with a quarter of an hour still to play. Rafa could away from Militao, and teed up second half substitute David Ferreiro, who had escaped from Marcelo before scoring. But it would merely be a consolation, as things got worse for Francisco’s side.

Another nice move from Madrid, Marcelo picked out Rodrygo Goes, and the young Brazilian headed across goal for Benzema to snap up a second of the game. A solid showing by Zidane’s team, and certainly one which will give them confidence ahead of the tough four games which follow.

A tale of three loans: Kubo, Reinier and Jovic

Zidane: “I never disrespected anyone, certainly not a player”