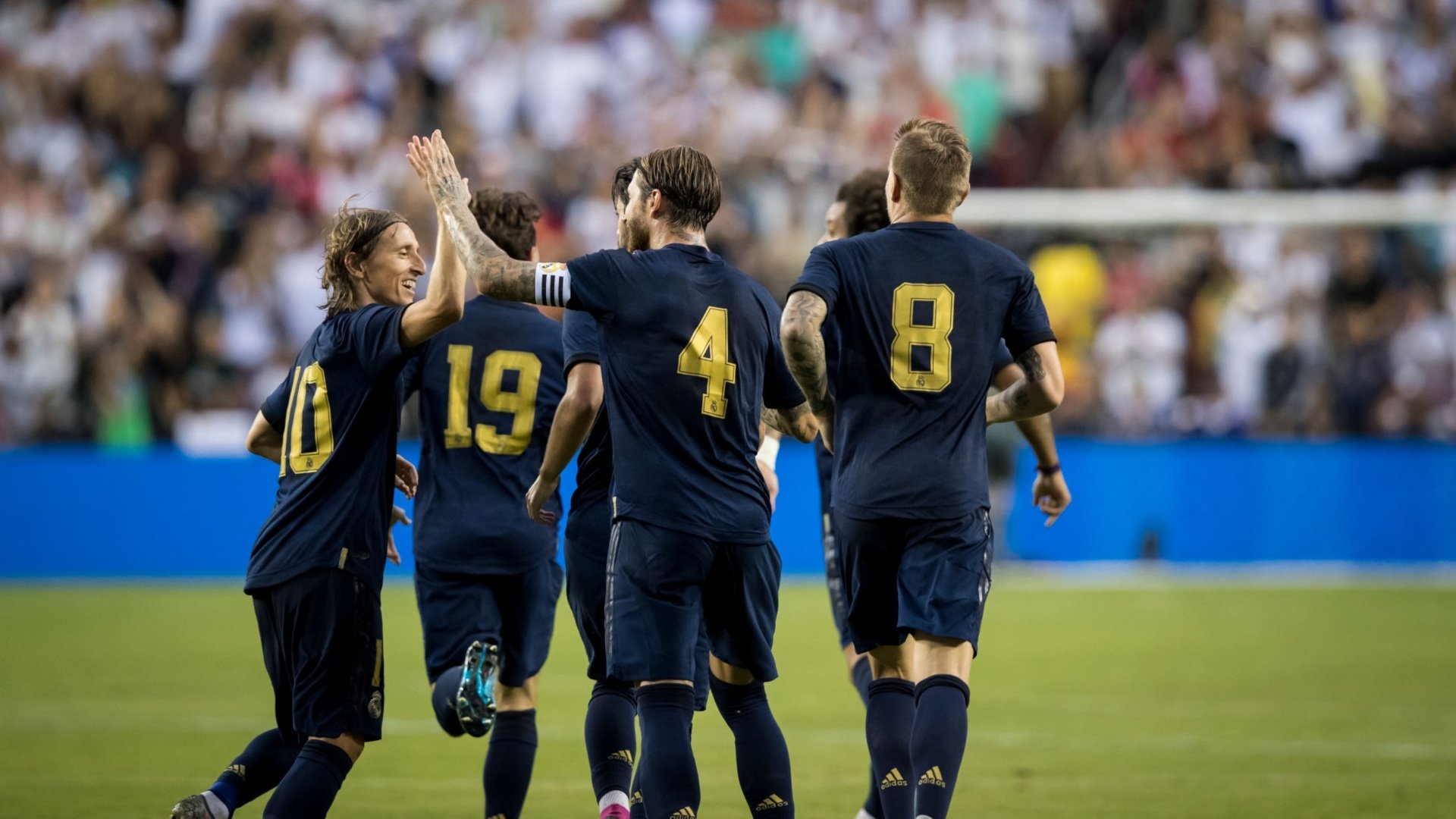 Real Madrid won the first International Champions Cup game of our 2019 pre-season tour, beating Arsenal 3-2 on penalties after the 90 minutes had finished 2-2, coming back from an early two-goal deficit at the FedExField in Landover.

Zinedine Zidane started the match with a 4-4-2 formation and made five changes to the side that started against Bayern in Houston on Saturday night. Keylor Navas lined up in goal, Dani Carvajal, Nacho Fernandez, Sergio Ramos and Ferland Mendy in defence. Toni Kroos partnered Luka Modric in midfield, with Lucas Vázquez and Eden Hazard on the wings. Karim Benzema started alongside Luka Jović up front.

Arsenal were the much better side in the opening exchanges, although Benzema had tested Emiliano Martinez with a low shot from the edge of the box inside two minutes. The Whites were dealt a blow as early as the 10th minute, when Lacazette skipped past Navas and attempted a shot which was blocked on the line by Nacho’s hand. The referee awarded a penalty which the French striker converted, while Nacho was sent off in the process.

Lacazette makes it 1-0 to Arsenal from the penalty spot

Zidane was forced to fill the gap in defence left by Nacho and made a substitution, cutting Jović’s full debut short and replacing him with Varane after just 16 minutes. Unai Emery’s men continued to press, forcing more mistakes from the Spaniards at the back. Eden Hazard then tried his luck from a tight angle but it was easily saved, while Navas denied a powerful shot from Mkhitaryan on the counter moments later.

Real Madrid enjoyed a brief spell of dominance but that didn’t last long. Arsenal were two goals to the good after 24 minutes as Aubameyang raced through, rounded Navas and fired into the goal, evading Ramos on the line.

The North London side remained on the front foot after half an hour, but things changed when Sokratis pulled down Modric with five minutes to go until half-time and was shown a second yellow card in three minutes. The Whites pinned their opponents deep in their own half and Benzema almost reduced the deficit but his header struck the woodwork, following a gorgeous ball into the far post by Kroos.

Los Blancos started the second half better, a left-footed strike by Asensio in a thicker of space from 25 yards hammered off the post on 52 minutes, the second time we were denied by the woodwork.

Zidane’s men continued to be in control and in the 56th minute they had a goal back. It was none other than Gareth Bale, who looked to be trying to prove a point. Isco surged into the box and found Asensio, whose cross caused a moment of chaos in front of goal and the Welshman emerged to poke the ball in from six yards to cut the deficit in half.

Just three minutes later the game was level. Marcelo played a cut-back pass to Marco Asensio, who scored at the near post with a clinical finish past Emiliano Martinez just before the hour mark.

In a blink of an eye, Marco Asensio ties it for Real Madrid! #RealMadrid pic.twitter.com/AtHRKivDSG

The goalscorer then suffered what looked like a serious knee injury, going down in a challenge with Aubameyang, before being stretchered off in pain by the medical staff. Some reports suggest that the Spaniard might have torn his ACL and could be on the sidelines for most of the new season, although nothing is confirmed yet.

Gareth Bale almost made it 3-2, but this time the Arsenal keeper was equal to the task, stopping the Welshman’s effort following a good cross from the right by Vinicius. Bale then was at the other end, clearing the ball off the line from Chambers’ powerful strike. Eddie Nketiah had a chance to win it in the 87th minute, but Courtois stood firm in a one-on-one situation to deny the youngster. Neither side could find a winner and the final whistle blew. It finished all square at the end, with penalties needed to decide the contest.