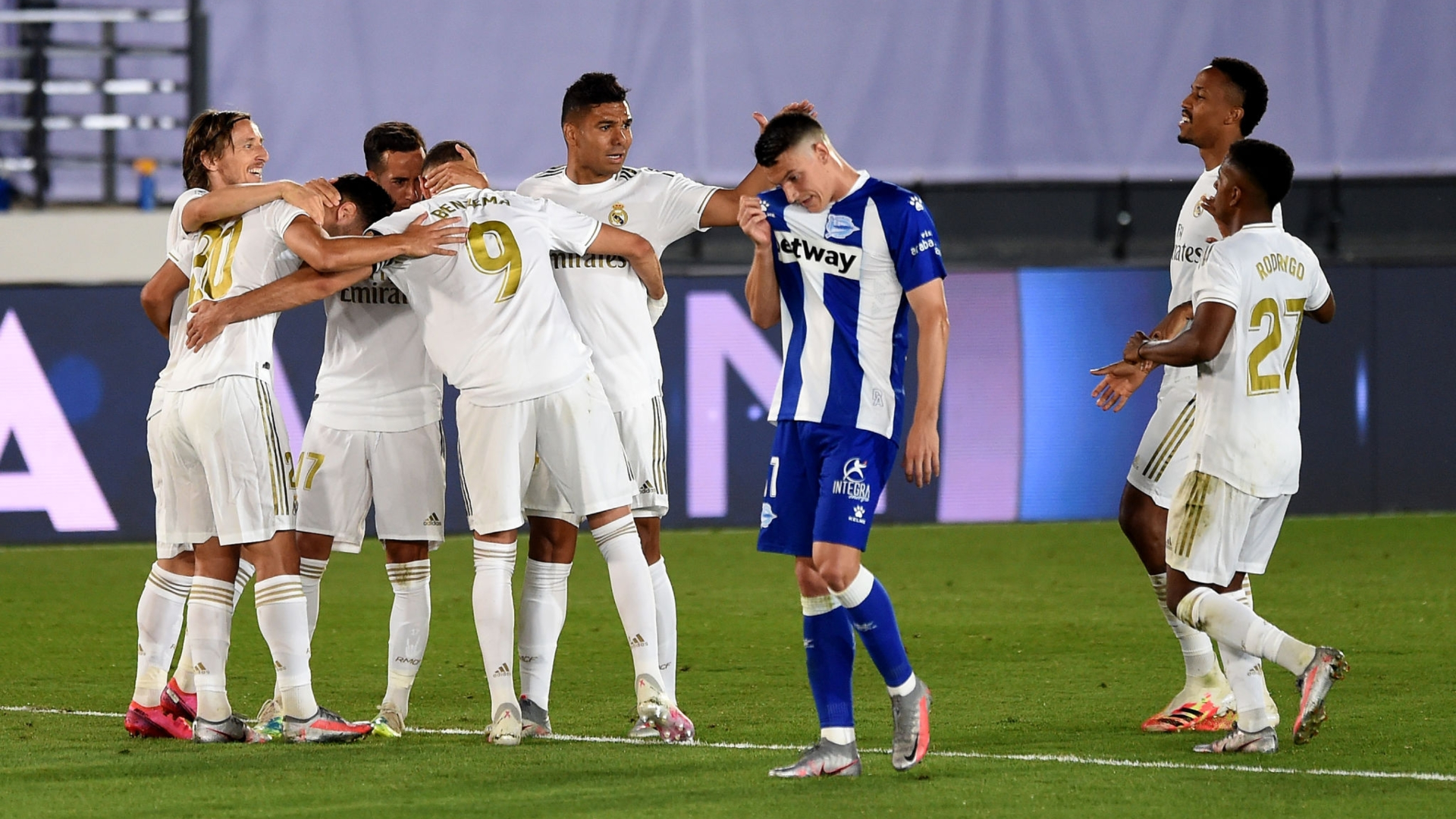 Without Dani Carvajal or Sergio Ramos, Zinedine Zidane went with Lucas Vazquez at right-back and it was immediately an avenue which the visitors explored.

And it was Alaves who had the first major opening. Edgar Mendez got the better of Vazquez, before his cross was headed onto the bar by Joselu, and then Raphael Varane was required to clear the rebounded effort off the line.

If that was an early warning sign to wake-up, that’s exactly the impact it had on Real. With 10 minutes on the clock, Ferland Mendy drove into the Alaves box before Ximo Navarro clipped his ankle, penalty given.

Karim Benzema popped up to convert from the spot in the absence of Ramos, to score his 18th goal of the league campaign.

On the counter, the Basque side were still a threat, particularly down the right side of Madrid’s defence, which was again exploited. Oliver Burke picked up a pocket of space with Vazquez further up the pitch, and although Casemiro was covering, Burke cut-inside the Brazilian and forced Thibaut Courtois into making his first save of the game.

Madrid controlled the latter stages of the first period, but without improving their scoreline, and that control continued into the first 20 minutes of the second half – it was a complete onslaught from the league leaders. Wave after wave of attack, and Rodrygo Goes capped off a fine performance with a goal contribution just before the hour mark.

The teenager took on a few players, beat them with trickery and stabbed a pass through to Benzema, who just about stayed on-side to lay it on a plate for Asensio’s second goal since returning from an cruciate ligament surgery.

That essentially meant Madrid were comfortable, but 2-0 didn’t flatter the hosts, they could have had more had Rodrygo, Benzema and second half substitute Isco taken very presentable opportunities. Despite all those chances, Courtois was still called into action once more, and yet again, the Belgian passed the test.

An eighth consecutive win for Real Madrid since the return from lockdown, and yet another clean-sheet. It definitely gets more difficult from here on in though, with Granada and Villarreal the next two opponents.

But Madrid are nearly there, if they secure five points from the final nine on offer, they will seal La Liga title number 34, and that’s only if Barcelona win their remaining three games. So Los Blancos are closing in, another win on Monday could well mean the next time they play at the Estadio Alfredo Di Stefano, they’ll be crowned champions.

Up next for Real Madrid