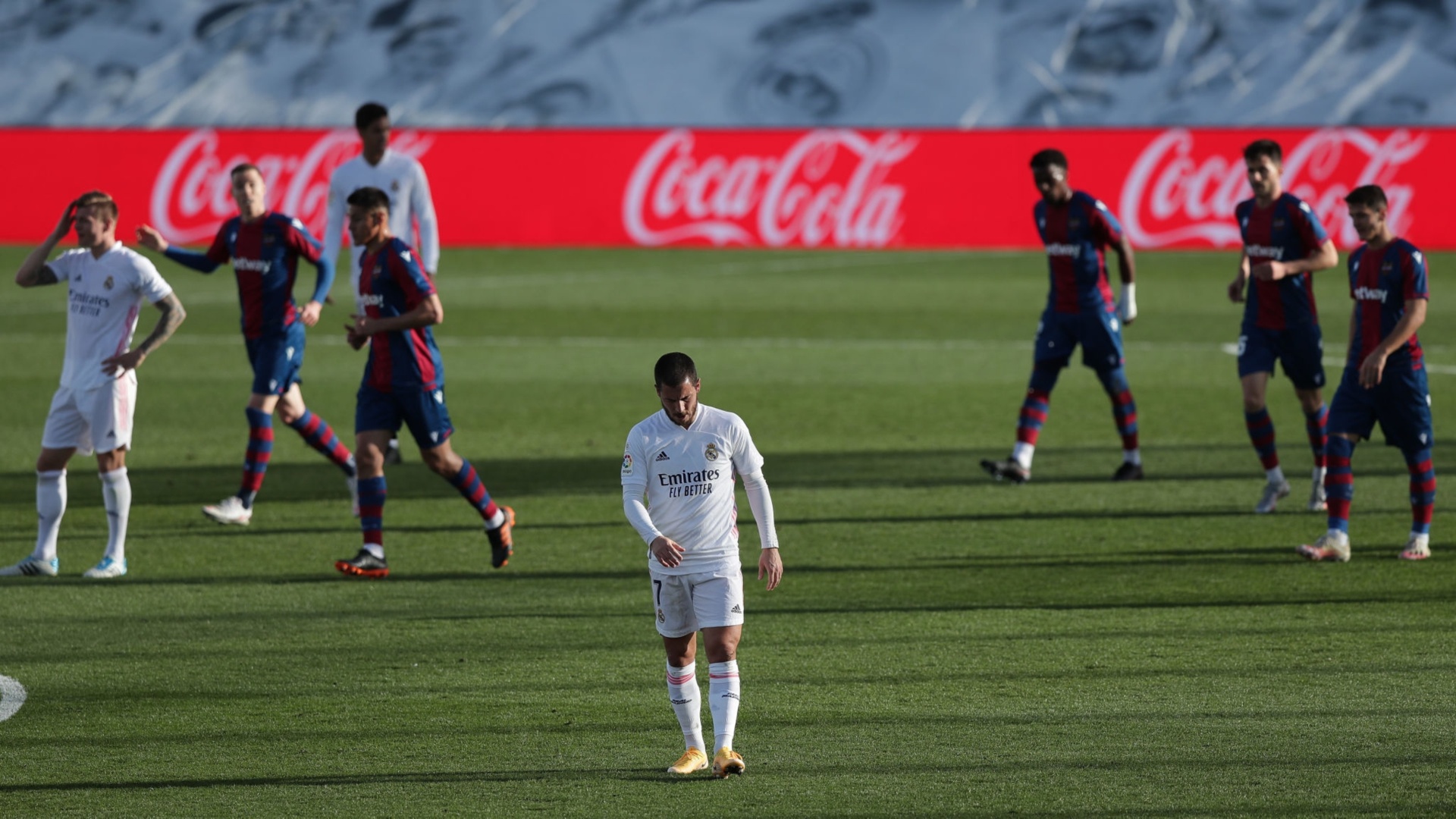 Real Madrid suffered a fourth league defeat of the season, all but ending their hopes of retaining La Liga, after a lifeless 2-1 defeat at the Estadio Alfredo Di Stefano to Levante.

It was an entertaining opening 10 minutes, with both sides open, and going for the three points. Eden Hazard’s recovery from injury looked to be moving in the right direction and the Belgian went on a run which was a lot like what he would do in a Chelsea shirt. He carried the ball from his own half to the edge of the Levante box, rode challenges, before playing a clever reverse ball to Karim Benzema who just couldn’t get on the end of the pass. But then, disaster struck for Madrid.

On a swift counter, Sergio León was through on goal, but Eder Militao clipped him before he could take a shot. A yellow card was initially given, but upon consultation with VAR, Militao was given his marching orders and Madrid were down to 10-men. That didn’t halt the hosts in their actions though.

Toni Kroos dissected the Levante midfield with a lovely through ball to Marco Asensio, who took it in his stride before giving the hosts the lead. The visitors were always in the contest though, especially because they had an extra man. Soon, Thibaut Courtois was called into action, a double save to deny Roger Martí who had two bits of the cherry. Real could have made it two before the half hour. Casemiro went route one to Asensio who broke the offside trap, and after a delightful first touch to bring it down, on the swivel, the Spaniard couldn’t connect with his right foot which would have doubled his goal tally.

Then Levante came again. Jorge Miramón’s cross to the back post sailed over Alvaro Odriozola and José Morales equalised with a superb first-time half-volley. Marti then came close again playing off Odriozola’s shoulder, and it wasn’t for another big save from Courtois, it would’ve been 2-1 to Levante at the break.

The drama didn’t end there. Benzema had a good chance to put Madrid ahead again, but after Kroos intercepted at the edge of the Levante box and laid it off to Benzema, the Frenchman put his shot well wide. And that’s as close as Madrid came to scoring in the second half, from then on, it was all the visitors. Vinicius replaced Hazard at the hour mark, and the Brazilian’s first involvement was fouling Carlos Clerc in the box, but it looked like he had won the ball. A penalty was given after further consultation with VAR, but Courtois saved Marti’s attempt from the spot. A second chance for Madrid?

They didn’t take it though. And with 12 minutes to play, Madrid fell asleep from a short corner. It was perfectly executed, leaving Marti in space in the box, to take a touch and fire it past Courtois. Yet another defeat for Madrid, a performance and a team without a soul. A tragic season continues, and now, the fight isn’t for the title, the battle to qualify for next season’s UEFA Champions League is the only hope.

Lucas Vázquez: “We have to get that good feeling back”