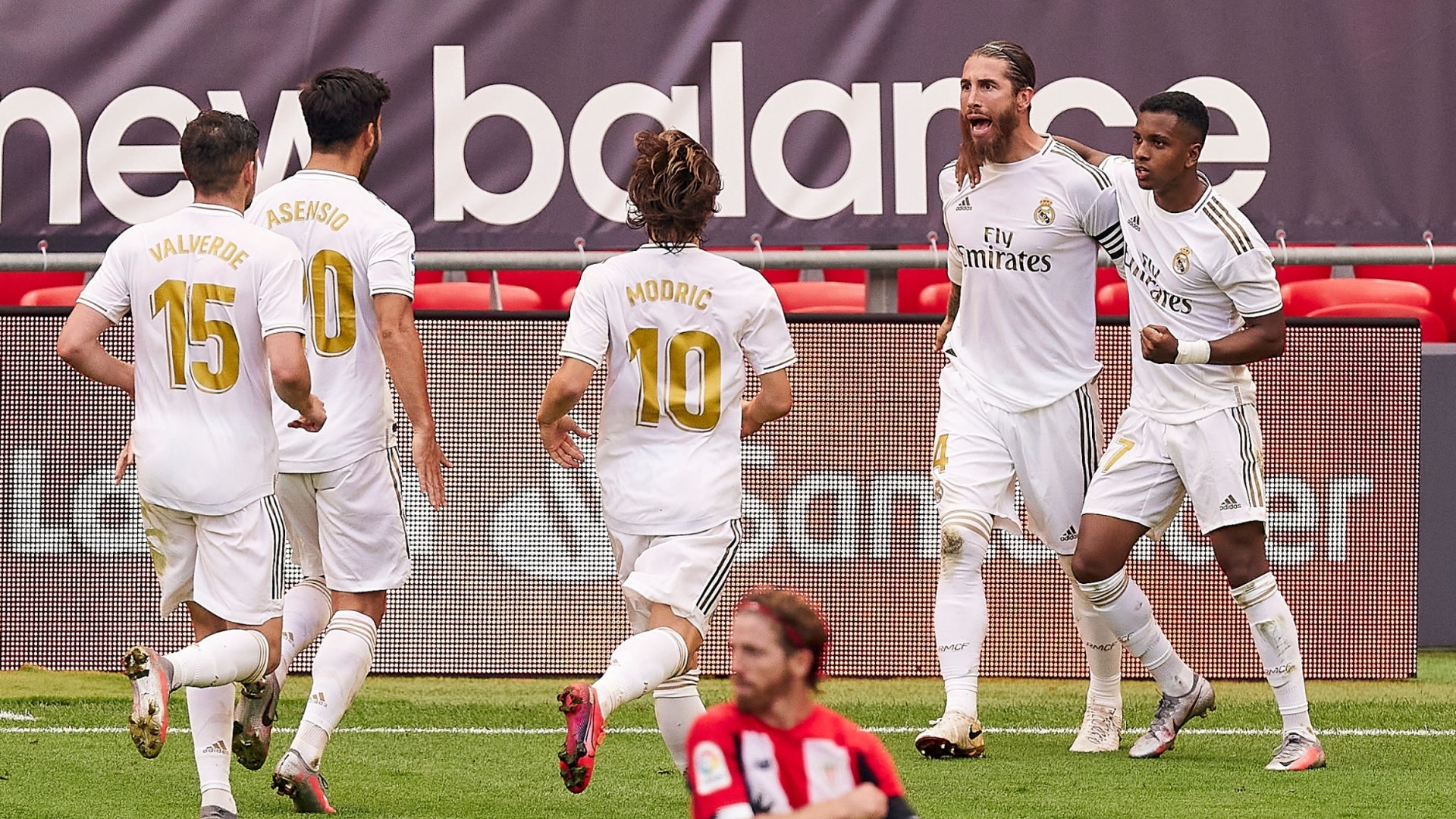 Real Madrid have temporarily gone seven points clear of rivals Barcelona at the summit of La Liga, after yet another Sergio Ramos penalty earned them a pivotal 1-0 win away at Athletic Club. The Catalans play later this evening against the in-form Villarreal, meaning this victory could leave Madrid with one hand on the trophy.

Unlike the Getafe game, Madrid weren’t under-pressure in possession, in a game in which Zinedine Zidane rested Toni Kroos, Ferland Mendy and Vinicius Junior, and instead went for a 4-3-3, with Luka Modric, Marcelo, Marco Asensio and Rodrygo Goes coming in for this tough fixture at the San Mames Stadium.

And it was Asensio who had the first opportunity. His free-kick was saved by Unai Simon, but the rebound fell to Dani Carvajal who was unable to cut it back to Karim Benzema, with the Frenchman eventually heading over the bar.

At the quarter-of-an-hour mark, the hosts then came closest to breaking the deadlock. Unai Lopez ventured inside instead of outside this time, and managed to get a cross which headed towards Raul Garcia at the back post, who out-jumped Carvajal and forced a smart save from Thibaut Courtois.

In his first start since recovering from a long-term injury, Asensio was clearly growing in the game, and he was soon dictating. The 24-year old whipped in a pass across the face of the goal, and it fell to Rodrygo who should have scored, though misjudged the bounce of the cross. And just before the break, there was another opening created by Asensio, this time, Benzema leapt too soon, and the chance was gone. Three headers from point-blank-range for Real in the opening half, they would have gone into the break disappointed not to be ahead, after what was a fairly evenly contested half.

The hosts came out looking more menacing in the second half, and on a dangerous counter attack, Courtois was forced into diving at the feet of Modric to collect Garcia’s cross which was destined for Iñaki Williams, a let-off for the visiting side.

Rodrygo appeared flat compared to his cameo against Getafe in midweek, but as the clock was winding down on his time on the pitch, the teenager came to life. A nice combination with Carvajal got Rodrygo through on goal, but his final touch allowed Simon to rush and collect it before the Brazilian could have a shot.

And with 20 minutes left on the clock, the decisive moment arrived. Marcelo made a sprint into the box, only to get clipped by Dani Garcia in the box after a 50/50 challenge. Referee Jose Gonzalez was asked by his VAR assistant to have a look at the on-pitch monitor, and he awarded Madrid a penalty.

Up-stepped Sergio Ramos, scoring his fifth goal since the resumption of football, meaning he’s now the leading goalscorer since the lockdown. Real’s captain also became the first centre-back to score 10 goals in a single La Liga season since Fernando Hierro during the 1993-94 season. A historic goal, and a pivotal one for the league leaders.

Zidane then called upon Kroos, Lucas Vazquez and Vinicius to bring some control to the proceedings, and Kroos very nearly created the second goal. The German playing a delicate one-two with Benzema, but the Frenchman’s stab at goal was saved by Simon.

Before the end, there was one more moment of danger for the visitors. Asier Villalibre pushed Eder Militao in the back, almost opening up Madrid, but Ramos was there to clear in front of Courtois. They hung on, and have now moved seven points clear of Barcelona, who play later this evening. This could well be the result which swings the tide of the title in Real Madrid’s favour.

Zidane: “We scored early and the game went well in every aspect”