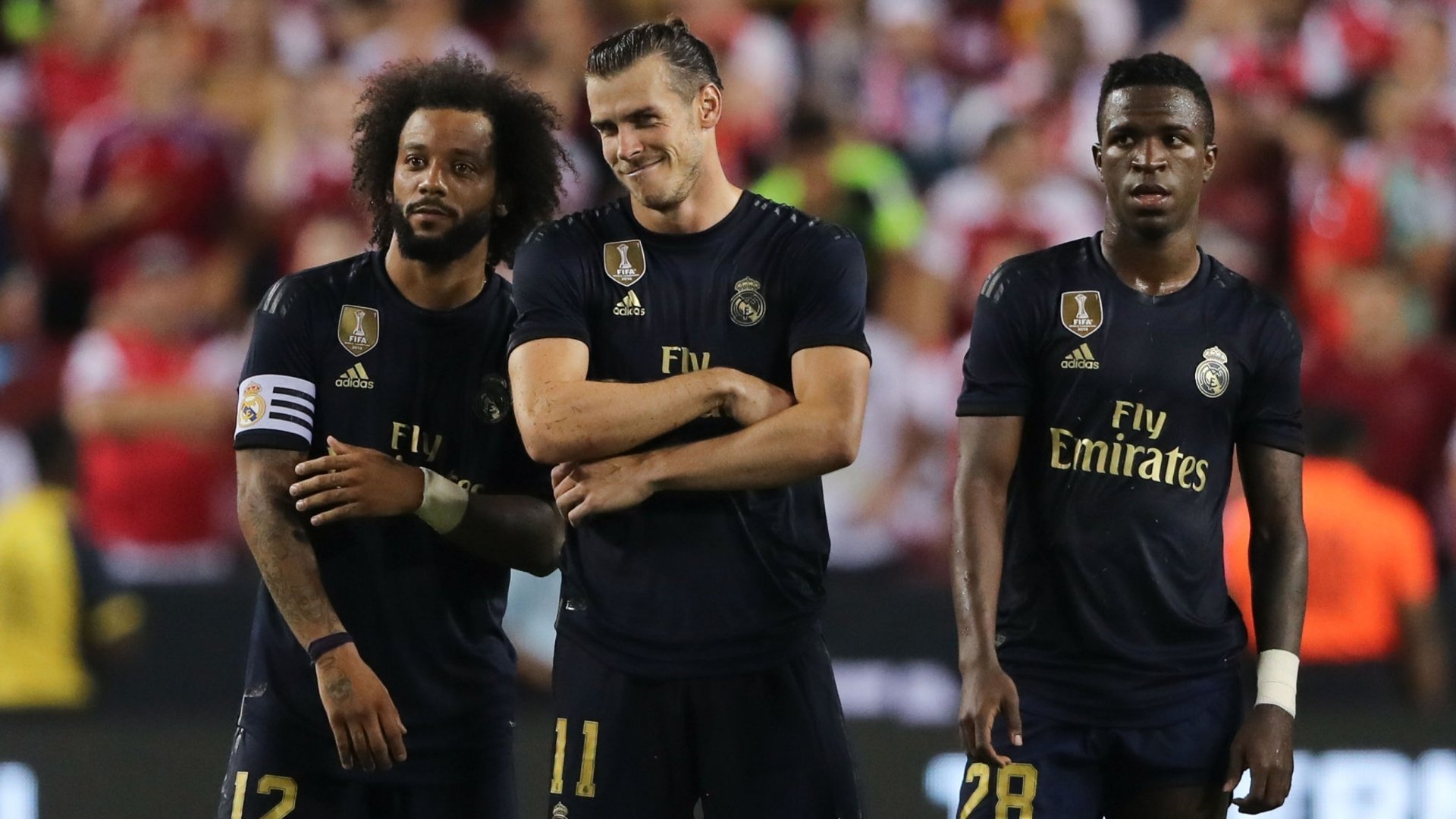 Our 2019/20 pre-season tour is drawing to a close. The MetLife stadium in New Jersey will host the first ever Madrid derby outside of Europe in the early hours of Saturday morning as Real Madrid lock horns with Atlético Madrid. (02:00 CEST; 20:00 local time). The Whites play city rivals in the last of the three International Champions Cup games.

Here’s everything you need to know…

TOUR COMING TO A CLOSE

After two-and-a-half weeks in Canada and the United States, Los Blancos prepare to wrap up what has been a hugely beneficial trip for the squad with a glamour tie against fierce rivals Atlético Madrid. Our 2019/20 pre-season campaign began with a 3-1 loss against Bayern Munich in our tournament opener, and was followed by a 2-2 draw with Arsenal, edging a win in a penalty shoot-out three days later. Attention now turns to signing off the tour on a positive note in our final contest against Atlético, and, despite it being a friendly, no team wants to lose to their eternal rival.

While Zinedine Zidane’s side did have a few positives to take away from the match against Arsenal, the main focus was on the negative, Marco Asensio’s anterior cruciate ligament injury. The 23-year-old Spaniard is likely to be out for the majority of the season. The injury comes as horrible news for the Whites as the youngster flourished under Zidane in 2016 and 2018 and started this pre-season in great shape. It was also a big chance for him to make that right wing his own, as Gareth Bale is set to depart. It is expected that the players will pay homage to Asensio before the game.

It has been a tough start to pre-season for Eden Hazard, who struggled to make significant impact thus far. The Belgian has only played 45 minutes in both previous encounters, but will be keen to raise his performance against Atlético as the new season comes ever closer.

Another summer signing who hasn’t had the best of pre-season is Luka Jović. The Serbian played 45 minutes in the first match against Bayern but failed to make his mark, mainly due to the fact that it was an inexperienced line-up filled with youngsters. He was handed his first start against the Gunners, but Nacho’s early red card meant that he had to be replaced after just 16 minutes.

Ferland Mendy was impressive at left-back, but he was the latest player in the squad to suffer an injury blow, following Asensio’s ruptured ACL and Brahim’s muscle injury. The French international will be out for 3-4 weeks.

Nacho Fernandez will not be able to feature as he was sent off in the early stages against Arsenal.

“It’s our third game, we’re going to try and continue with what we’re doing: working hard, competing and trying to do a better job out on the pitch. My players are happy to be playing a game like this and I’m sure it’s going to be a great match.

“I’m going to keep giving the players some minutes each. When you lose a couple of players to injury it can be a real problem, but it’s normal. Tomorrow we’re going to play well and compete. We are facing a combative, tough rival of ours, and we’re going to try and take the game to them. Everyone wants to see a good game.” Zidane said in his pre-match press conference.

Atlético Madrid got their pre-season preparations underway last weekend by beating Numancia 0-3. The match saw a number of players make their debuts, including Kieran Tripper, Mario Hermoso and big-money signing João Félix. Los Rojiblancos have played just one game at the International Champions Cup, a goalless draw with Mexican side Guadalajara, which they eventually won 5-4 on penalties.

It has been a busy summer for Diego Simeone’s side in terms of incomings and outgoings. João Félix, Marcos Llorente, Mario Hermoso, Kieran Trippier, Felipe, Renan Lodi, Hector Herrera and Ivan Saponjic have all arrived. While Antoine Griezmann, Lucas Hernandez, Rodri, Gelson Martins, Luciano Vietto and Bernard Mensah have all been sold. Filipe Luis, Diego Godin and Juanfran have left on free transfers.

Ex-Real Madrid midfielder Marcos Llorente will be eligible to feature in the derby against his former team, after his red card against Guadalajara was appealed and revoked. Atlético will also be without Sime Vrsaljko, who has been injured since January and did not travel with the squad.

João Félix suffered an injury and limped out of his debut against Numancia, missing their ICC opener against Guadalajara, but is expected to be back and feature tonight.

Although this is going to be the first ever Madrid derby outside of Europe and the first time on American soil, the two sides have met 222 times in total, with the Whites being significantly superior, winning 110 of them compared to Atlético’s 56.

Real Madrid recorded a 3-1 win over their city rivals in the last encounter between the two teams at the Wanda Metropolitano in LaLiga back in February. Prior to that, four of the last five league meetings have finished level.

The two most iconic clashes outside of Spain happened in the 2014 and 2016 UEFA Champions League finals, when Los Blancos won la Décima and la Undécima.

Real Madrid will be without Marco Asensio after he was stretchered off the pitch against Arsenal and damaging his ligaments, facing a lengthy spell on the sidelines. Ferland Mendy will be another absentee after suffering a muscle injury in training, while Brahim continues his recovery from an injury suffered at the beginning of the tour in Montreal.

Eden Hazard is likely to make his third start in a row down the left, with Karim Benzema upfront and Vinicius Jr. could be given the nod on the right to complete the attacking trio.

Gareth Bale is expected to be on the bench again, despite scoring against Arsenal, with Isco, who was on the bench the last time, lining up alongside Luka Modric and Toni Kroos.

Marcelo will surely start as left-back after having been left out of the team that faced Arsenal, with his direct competitor Ferland Mendy being injured. Varane is also expected to return in the defense and partner captain Sergio Ramos.

As for Atlético, Alvaro Morata, Diego Costa and João Félix are expected to start in the final third, although the Portuguese striker could be on the bench after having only been recovered from an injury. Marcos Llorente is set to start in midfield alongside Hector Herrera.

WHERE ARE WE PLAYING?

The derby will take place at the MetLife stadium in New Jersey. The Whites have played there before, in 2016, when we beat Bayern Munich 1-0 courtesy of Brazilian right-back Danilo’s strike, and in 2018, when goals from Marco Asensio and Gareth Bale ensured we ran out 2-1 victors against AS Roma.

The MetLife stadium is a 82,500 capacity American sports stadium and serves as the home for two NFL teams: the New York Giants and the New York Jets. The stadium opened as New Meadownlands Stadium in 2010 but was renamed in 2011 after MetLife, an insurance company based in New York City acquired the naming rights.

WHERE CAN I WATCH THE GAME?

The match will kick off at 02:00 CEST (20:00 local time) and, like each and every one of Real Madrid’s International Champions Cup games, it will be shown live on Real Madrid TV, which can be watched worldwide on realmadrid.com

WHO ELSE ARE WE PLAYING IN PRE-SEASON?

After we’ve played Atlético, we’ll be heading back to Europe to participate in the Audi Cup in Munch, taking on Mauricio Pochettino’s Tottenham in the semi-final on 30 July, and then either Bayern or Fenerbahçe a day later. To finish our pre-season preparations, we have a trip to Austria on 7 August, where we’ll play Red Bull Salzburg. After that, to draw our pre-season to a close, we’ll travel to Italy to play AS Roma at the Stadio Olimpico on 11 August, although the game is still set to be officially confirmed.