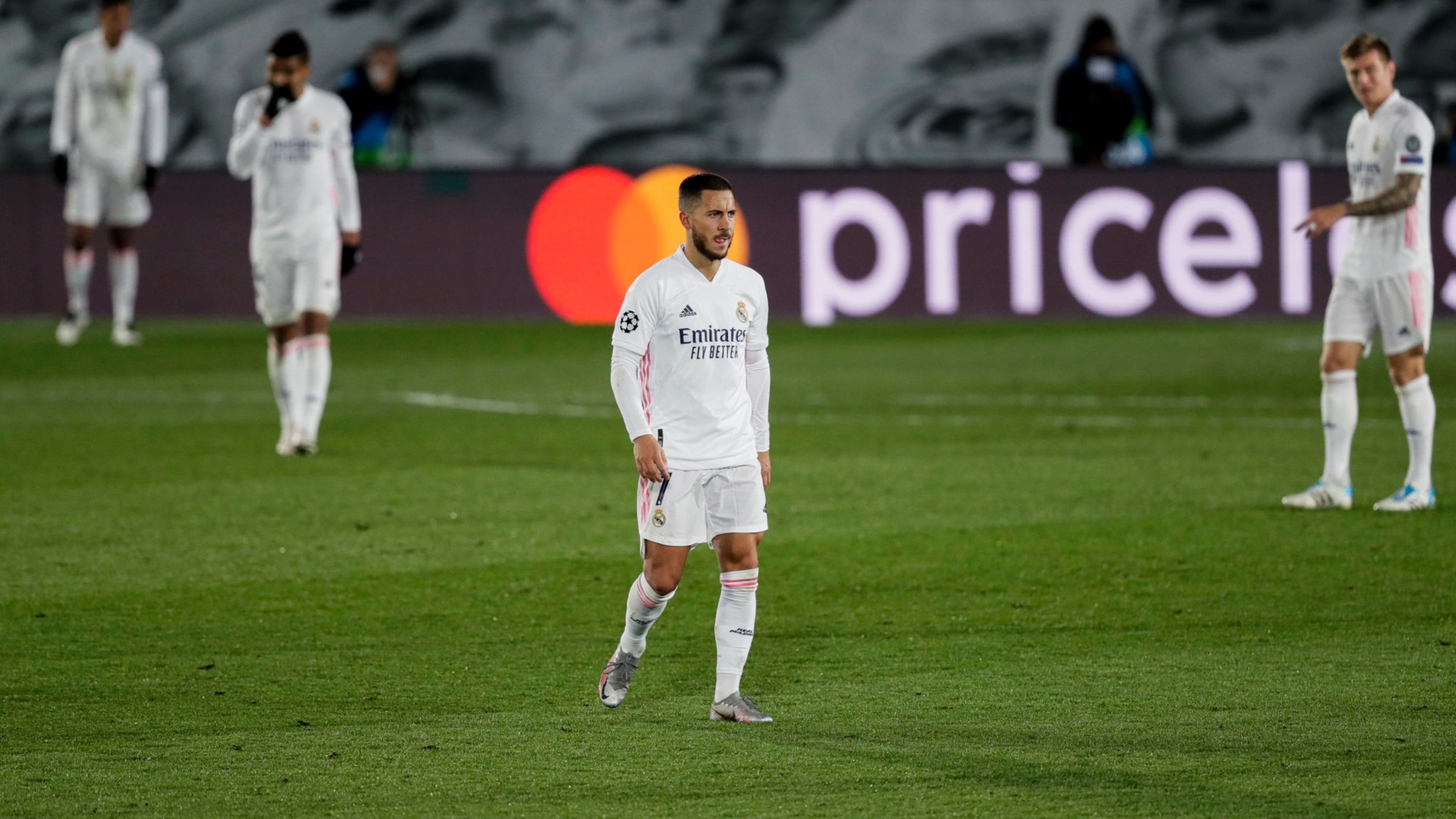 Yet another make or break night in Real Madrid’s turbulent season.

Zinedine Zidane’s men travel to face Inter Milan later today at 21:00 CET, and anything but three points in Italy could prove decisive in Madrid’s quest to reach the UEFA Champions League’s round of 16.

Saturday’s 1-1 draw with Villarreal only further highlighted the issues with the squad, which is struggling for depth following Covid-19 positive results and further injuries to key men. And with that in mind, Zidane may opt for a formation, and line-up which surprises many at the San Siro. It’s the perfect opportunity for Eden Hazard to stake his claim as Madrid’s leader on the pitch, as he comes up against former manager Antonio Conte, who he didn’t always see eye-to-eye with at Chelsea.

The Belgian has a solid but not overly decisive performance under his belt since returning from a positive Covid test, and he’ll want to move up a few gears in the tournament he’s yet to shine in one club level, which also happens to be the tournament his new side crave every single season.

For the hosts, this past weekend didn’t make any better reading, other than the fact that they won their match in Serie A. Inter sit in fifth, five points behind leaders and city-rivals AC Milan, after their 4-2 comeback win over Torino. It was far from pretty though, another victory earned through individual brilliance, as Alexis Sanchez, a Romelu Lukaku brace and a late Lautaro Martinez clincher sealed the win, when they had been 2-0 down up until the 64th minute, and were being outplayed.

The good news for Conte coming into this, is that he has Lukaku back, who will no doubt help Lautaro against Madrid’s make-shift back-four which lacks Sergio Ramos. There have been eight matches in recent seasons in which Madrid haven’t had Ramos leading their defence, with Madrid losing seven of them, most recently the 2-3 defeat to Shakhtar Donetsk, and last season’s 3-0 loss to Paris Saint Germain and 2-1 loss to Manchester City. Without Ramos, Madrid are certainly penetrable.

With Casemiro back, Real retain some of their structural strength. It’ll be interesting to see how Zidane decides to go in midfield, if he goes with the conventional three, or if he decides to use a diamond with one of Isco or Martin Ødegaard for added creativity at the tip of the diamond behind Hazard and Mariano Diaz or Rodrygo Goes.

With Marcelo Brozovic out, Madrid should look to dominate the center of the park, if they do, they should win the match. That’s where this contest is going to be decided, which is why Zidane will need his chief controllers on the pitch, while Hazard and full-backs Ferland Mendy and Dani Carvajal will have a lot of work to do to overlap and create chances.

Real looked to be cruising after Karim Benzema and Ramos scored two in the opening half hour, but a brilliantly engineered assist by Nicolo Barella allowed Lautaro to get one back when Madrid fell asleep after going 2-0 ahead. But Madrid’s goals were interesting.

The first came from pressing Achraf Hakimi who’s back-pass gifted Benzema the opener, and the second came from a corner, where you certainly hurt Inter. With threat such as Casemiro, Raphael Varane, Nacho Fernandez and Mariano, Madrid might opt to play corners short, and deliver those sharper flatter balls from angles instead of dead-ball corners, just to hurt and trouble Inter’s backline more.

The key battles will no doubt be how Varane and Nacho handle the pace, movement and combination player of Lautaro and Lukaku. Their movement in particular is worrying, because when Inter’s full-backs get involved on their overlapping runs, Madrid’s central defenders will get pulled apart, allowing central areas to be vacant for runners from midfield while Varane and Nacho are occupied, that’s where Conte will look to hurt Madrid, and he may well succeed at it too.

Inter are going to be without trio Aleksandar Kolarov, Brozovic and Daniele Padelli who are still isolating, while Stefano Sensi and Matias Vecino are still injured. Conte could also shuffle the starting XI for this must-win match, which could see Milan Skriniar return, who was absent from the last time these two sides met.

For Madrid, key trio Benzema, Ramos and Federico Valverde are injured, and so is Alvaro Odriozola, while Eder Militao and Luka Jovic are isolating having not yet recovered from Covid.

The last time they played

Their battle three weeks ago was intriguing on many levels, and Rodrygo’s winner with 10 minutes to play gave Madrid a crucial victory keeping their progression hopes alive. Both teams will come into this one with even more to lose, and it could lead to a cagey contest, as it’s one which neither can afford to lose. The last seven times Madrid have faced Inter at the San Siro, the Nerazzurri have won five and lost twice, boasting an incredible record on home soil against the European Kings, but records are there to be broken, and so you can expect Madrid to turn it on later today, with fate still in their own hands.