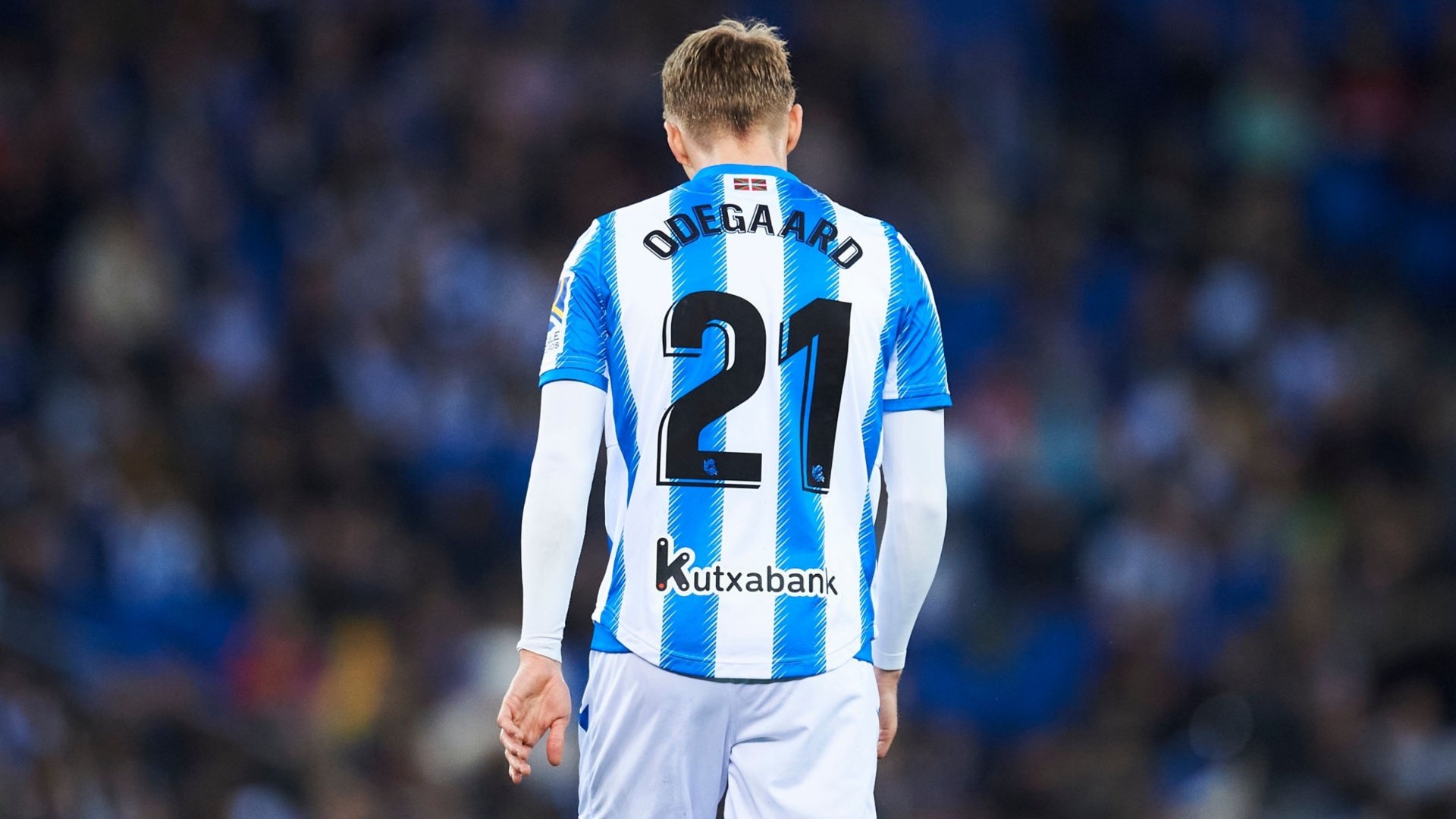 “It became clear early on that Martin saw solutions and space that we as coaches were not even close to thinking about. He handles things brilliantly. He makes good choices. He has a good touch and is smart positionally.”

Those were the words of Håkon Grøttland – the architect behind Landslagsskolen, the Norwegian Football Association’s player and coaching development model – when a 13-year old Martin Ødegaard was demonstrating things on the football pitch which were an enigma to coaches in his homeland.

Fast forward two years, and little Ødegaard was fast growing out of Norway, his talents demanded a move. The 2014 season had proven just that, aged 15 and 118 days, the boy who was already wowing football fans worldwide on YouTube, had become the youngest player to make his professional debut in the Norwegian top flight. And he continued to excel.

It was the season which cemented his talent, the season he demonstrated exactly what he was about. In the 23 league games he played that year, Ødegaard scored five goals and made six assists, all before his 16th birthday. The eyes of world football were on him. And indeed the elites were queuing up for the opportunity to secure the signature of this unique teenager, who was already the pride of a nation.

The wooing began in December 2014, when Ødegaard had turned 16. Just as they did years earlier when he was only 13, both Bayern Munich and Manchester United invited him back to train with the first team and to have a look around the facilities. So did Liverpool and Arsenal, and Manchester City were closing in. As ‘The Athletic’ reported a few months ago, the Norwegian was really close to being the pearl of City’s academy. But when Ødegaard and his father sat down with Txiki Begiristain, City’s director of football, the question Hans Ødegaard asked the Spaniard was “Real Madrid have said my son will go straight into the first-team and train with the Galacticos, what can you offer us?” Begiristain couldn’t offer the same luxury – it was at that moment Ødegaard’s future landed in Madrid.

In January 2015, Ødegaard trained with Real Madrid and spent time around Valdebebas, by the 21st of the same month, Madrid had reached an agreement to sign the player. And although then coach Carlo Ancelotti later described it as a “PR exercise”, what the Italian failed to realise was that Ødegaard was the start of the club’s new youth policy, a policy which continues today.

But it hasn’t been the smoothest of rides since arriving at the Santiago Bernabeu, and his loan-moves have been correctly criticised and analysed by many in a negative manner. Ødegaard spent 2017/18 on loan at Heerenveen, and then the following season at another Eredivisie club, Vitesse, where things really began to click into action. The next decision was easy, Madrid sought after a club which would take their golden boy’s development to another level, but closer to home – enter, Real Sociedad.

Over half a decade has now passed since Ødegaard became a YouTube sensation, he’s now one of the best players in arguably the best league in the world. Madrid have hit the jackpot, by fluke or by design, they have hit the jackpot. And the next decision is how the club integrates this world class player, no longer just a talent, into their starting line-up.

It wouldn’t be an exaggeration to say Ødegaard has transformed Real Sociedad’s fortunes this season. A team that last season ended in ninth place, received the spark that they most definitely needed. The 21-year old has been the heartbeat of his side, with an 84.7% passing accuracy, completing 1034 out of 1221 passes. He averages 54.6 passes per 90 minutes, has created 54 chances and has contributed to four goals and five assists for the team which currently sits in a UEFA Champions League spot.

Often, his final season in the Eredivisie is compared to Frenkie de Jong’s at Ajax, and although Ødegaard functions higher up the pitch, Madrid’s talisman even won the key battles that year:

He has been a statistic marvel this campaign, and so it is no wonder football analysts and writers haven’t stopped waxing lyrical about the 21-year old: Indeed, Real Madrid have struggled in the areas which Ødegaard has thrived in. A team which heavily relied upon the dribbling and final ball quality of Eden Hazard, have struggled to put games to bed. This all while Ødegaard has a dribbling success rate of just under 63%, and has a pass completion rate of nearly 85%. Competencies which would no doubt help Madrid bury their opponents. This is an interesting piece of analysis by a Twitter account named From The Stands, where he highlights the importance of Ødegaard’s final third passes, which more often than not, lead to danger, or create a goalscoring opportunity for his teammates. When he drifts into deeper or wider areas, Ødegaard has often used his vision and ability to create a chance out of nothing. Again, Real Madrid needs a player of this ability, a player capable of doing things which they have often craved this season. It’s no secret Madrid have struggled to kill off games, they’ve struggled to create chances against sides which sit-deep and block, but Ødegaard has had the answers. Take a look at the damage he does in the final third, whether it’s a through ball or quite simply a forward pass into dangerous areas – with the movement of Real’s forwards, Ødegaard could cause havoc. And if the point wasn’t already evident enough, Ødegaard’s value of passes ranks among the top five in La Liga this season too, above Lionel Messi. This graphic is very interesting, because for me it highlights Ødegaard is the player who can replace Luka Modric over the long-term, due to him operating in similar channels, and in similar areas.

Looking at his heatmap for the 2019-20 season, Ødegaard does most of his damage on the right of the pitch, and often drifts centrally too. And while his ability at the edge of the box is something to adore, there is enough evidence to suggest he would combine well with the likes of Toni Kroos, Casemiro and Fede Valverde. Essentially, if given an adapted free-role, Ødegaard could find himself in similar position to what Messi finds himself in at Barcelona.

But while they should be moving mountains to convince Ødegaard to return, Los Blancos instead continue to be linked to the likes of Paul Pogba and Fabian Ruiz. There is most definitely a debate to be had whether or not the club should abandon interest in other players, and instead focus on giving Ødegaard the platform which he has statistically shown he is ready for. Of course, whether the player wants to return or not, regardless of what the club promises, is an entirely different story.

However, moving on with the assumption that correct decisions would convince Ødegaard to return next season, I took a look at some comparative statistics between Ødegaard and Pogba, Fabian and Messi. And although all four are different players with different roles in their respective sides, the results made interesting reading: Created by a Twitter account named Amer Khosla, the aspect I love about this graphic is that Ødegaard excels in aspects of his game which most football analysts consider to be the Norwegian’s area of expertise. Key passes, expected assists and successful dribbles are all areas which Madrid as a team will require once Modric decides to move on. It was unfair to compare Pogba’s 2019-20 season to Ødegaard’s, because the Frenchman simply hasn’t played enough games to merit a comparison. This is much closer comparatively, and while it is obvious to see both players operate on opposite sides of their midfield, Pogba is clearly the superior from deep. Statistically, it’s a nicer comparison between the two, with Ødegaard still coming out on top in the three aforementioned key stats. And lastly, a comparison between Ødegaard and the man who’s end product we all hope he comes close to replicating. All of the talent is obviously not there, but after years of watching the Norwegian, he certainly shows glimpses of the great man. Conversion rates and goalscoring would have to increase rapidly, but I don’t think we expect that, what we would like, however, is for Ødegaard to reach his potential, because like Messi, but in different ways, he truly is one of a kind.

It would be fitting to end on a quote from a former football manager in Norway named Lars Tjærnås, who described the moment when a 12-year old Ødegaard played in a national under-16 tournament:

“It was definitely not the first time he had astonished his opponents or the spectators. He was three or four years younger than the others. It was impossible not to realise that we were witnessing something out of the ordinary.”

Madrid have a big decision to make, because the return of Ødegaard cannot come soon enough.

Zidane: “The key thing is to always give it our all”