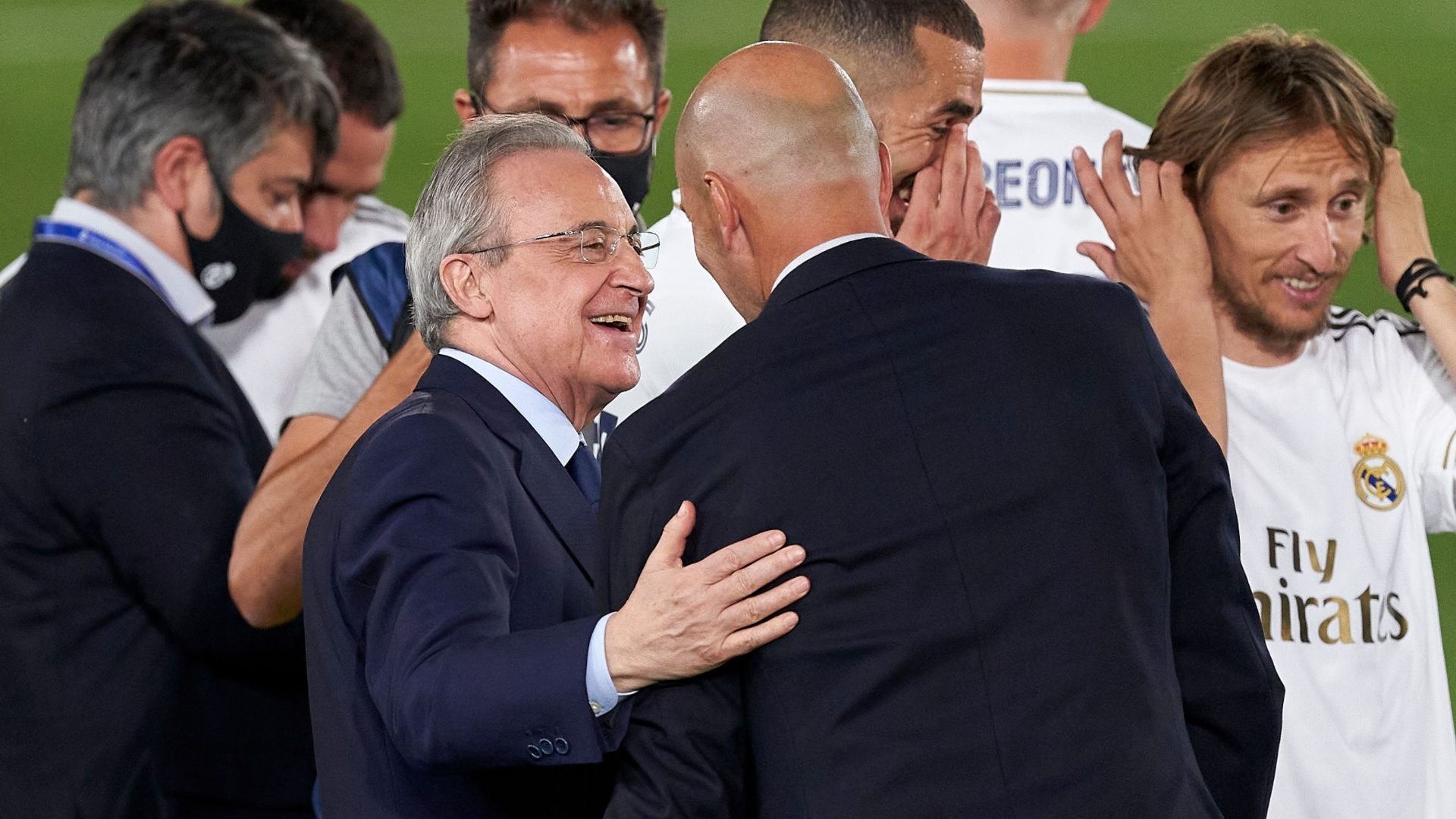 Immediately after his Real Madrid clinched their 34th La Liga crown, president Florentino Perez answered some questions, but the answers regarding the immediate future and direction that the club is heading towards were particularly striking to me.

“We won’t make big signings, the situation is very bad. It’s very tough to ask our players to take a salary cut and then sign big players, they can all wait. Real Madrid will sign big players again when the situation improves. This year has been the toughest for me because we lost the income of the stadium, which is very big, and we had to talk to our players so that they showed their solidarity. Had they not taken a salary cut we would’ve had economic loss, but we are not going to go through that because of them.”

While I appreciate the sentiment, and perhaps it won’t make the club look as good as it would do if they were to stick to the original approach of not spending, the fact remains, to not give Zinedine Zidane anything more to work with, is asking for issues next season.

Next year is an election year, and it’ll be over two decades since Florentino first ran, up against the late Lorenzo Sanz. He won the election, and entered into his first-term, simply because he promised things which others couldn’t, and he delivered, too:

“If I am elected president of the club, Figo will be a Real Madrid player.”

This Friday will mark exactly 20 years since Luis Figo was signed from Barcelona. It was risky, it was difficult, but he pulled it off, the first of countless deals the civil engineering tycoon miraculously completed, while people would have laughed at such aspirations.

But where is that leader who we all knew? Personally, I have backed him and I will continue to acknowledge he isn’t replaceable, and therefore, another term for him as president of the club is most certainly the right way for Madrid to progress, but we need more from Perez. I also have the utmost respect for the manner in which he has handled the club’s finances, twice, in his first term after Sanz, and in his second after Ramon Calderon, he rescued Real financially and has the club sat at the summit of the power and financial rankings. But this is where, as a supporter, looking at the wider picture, I am left utterly bemused and baffled by this approach of not spending.

Bayern Munich have already spent close to €50 million, and they’re likely to add a few more pieces too. Chelsea are close to spending €100 million, and they’re still targeting the signing of Bayer Leverkusen star Kai Havertz, which will be close to €70 million too. Manchester United will probably end up signing Borussia Dortmund superstar Jadon Sancho for around the €60-80 million mark without add-ons, and Barcelona are still looking to sign Inter Milan forward Lautaro Martinez, which will cost them around the €100 million mark too. All these signings are being made, and the teams in question aren’t necessarily selling their own players as of yet either, so logically, this means Covid-19 hasn’t impacted these teams as much as Madrid. Which isn’t the case at all!

In contrast to these teams, Madrid actually have players to sell with market value. You talk about the likes of Nacho Fernandez, Jesus Vallejo, Alvaro Odriozola, Dani Ceballos, James Rodriguez, Oscar Rodriguez, Lucas Vazquez, Gareth Bale, Mariano Diaz and Borja Mayoral – these are all players who, according to AS and MARCA, the club value at between €150-200 million.

The club was clear to its sources in the media, that with 37 players on the books when pre-season is due to begin, the first and foremost task will be to sell the unwanted players, and to secure loans for the youngsters who Real believe in for the future. That’s fair, and you can’t disagree with that, but once that’s done, and let’s say they secure an income somewhere in the region of €150m, why does it seem to me like they still won’t spend a single euro on improving the squad, even if they’ve sold thoroughly well?

To me, it appears like Real have put all their eggs into the 2021 summer transfer window basket. And while I’m all for another window which equates to well over €300m in expenditure – that’s exactly what the club will need next summer – that’s not what the club needs for the immediate future, for the 2020-21 campaign.

Zidane is quite rightly being hailed as a genius and a “blessing from heaven”, in Florentino’s own words, for the way he’s engineered a title winning season from the bare scraps he has had to deal with. His checklist was long and difficult: Zidane had to revive players who many thought were far past their prime, Zidane had to integrate youth players into ones capable of contributing in big games, Zidane had to do without his marquee signing Eden Hazard for essentially all of the season, and on top of it all, because he recognised his team lacked goals and firepower, he instead completely turned the club’s usually attacking philosophy on its head, to a team which resembles something out of a Diego Simeone wet-dream, a unit which only conceded 25 goals.

I never once saw Zidane cry after the third consecutive UEFA Champions League title, it was only smiles, not tears, but the emotions he displayed after winning this title were unique, because this challenge was the toughest he has faced. Do you realise how difficult it was for all of that to come together: for Sergio Ramos, Casemiro and Toni Kroos to be their side’s second, third and fourth leading goalscorers in the league respectively? A club like Real Madrid should not have to rely on their central defender, defensive midfielder and controller, to share the burden of 19 goals throughout a league campaign, it’s not sustainable. And a club like Real Madrid should most definitely not only have one player capable of scoring above 20 goals in a season.

Of course titles like this should be celebrated, I’m not saying we shouldn’t hail the team’s performance, it is quite literally an historic achievement, but this team still can be improved in so many ways, and surely Zidane will want to improve it, but again, will he even have the option to add any players to the squad? And yes, the likes of Hazard, Eder Militao, Luka Jovic, Marco Asensio and Rodrygo Goes will feel like new signings next season, because they can only improve, so that should help a bit, but how much of a difference will they make, are they capable of making an impact to help Madrid defend their league title and also compete for the Copa Del Rey and the Champions League?

The only thing I am certain of is that Zidane has earned the right to choose who he wants to depend on, who he doesn’t want in the dressing room, and who he would like to sign. It is then down to the club’s leaders to execute these transfers, however complicated they may be. And honestly, Madrid are financially able to spend this summer, regardless of what the media in Spain have been told to convince you with.

This club is powerful and resourceful enough to sign the two or three players who Zidane requests, players he feels will contribute to titles next year. Florentino can then put however many eggs he wants into the Kylian Mbappe basket, but if he fails Zidane this summer, and Mbappe also extends his Paris Saint Germain contract before 2021, then don’t be surprised to see Zidane walk away once more, and if I could, I’d open the front gate personally for him to walk out – because Zidane deserves so much better!

Sergio Ramos: “We’re going to do our best to achieve success”