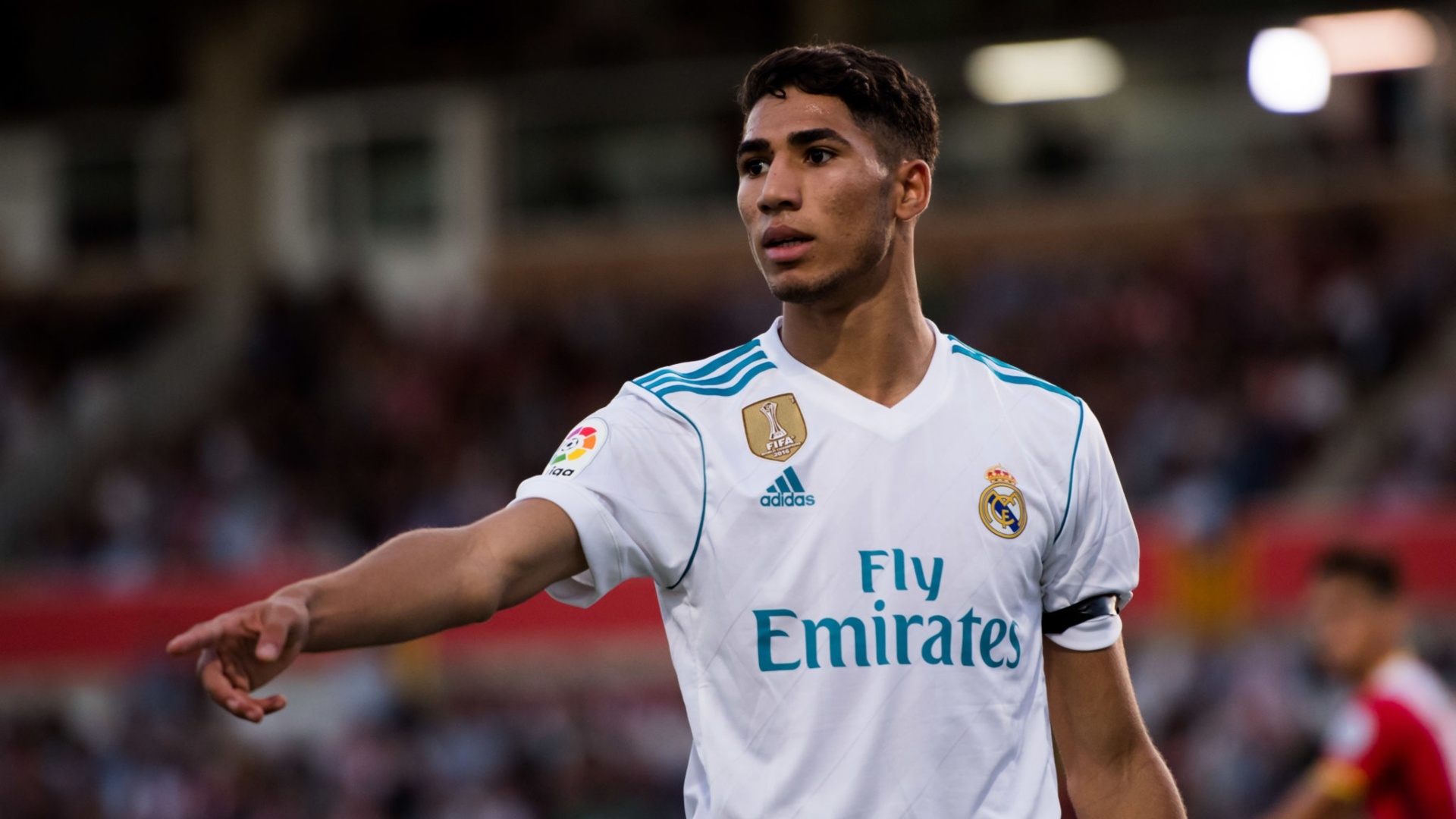 Achraf Hakimi will this week make a permanent transfer to Inter Milan, with Real Madrid reportedly earning €40 million + €5 million in added on bonuses, for the deal. But it’s a deal which has raised a lot of question marks among Madrid fans.

Hakimi joined Real in 2006 from Club Deportivo Colonia Ofigevi, a football team that was based in El Bercial, Getafe, around 25 kilometres from the Santiago Bernabeu. He was eight years old when the club noticed something special about him, and after arriving, he gradually progressed through Madrid’s famed La Fabrica. A player who’s got the club running through his veins, he knew all about the expectations, and when his chance came, he took it, and impressed.

The first time I can remember being impressed with the Moroccan was during Madrid’s UEFA Champions League clash with Tottenham Hotspur in 2017, he really stood out. His impressive 90 minute performance was crowned by one specific moment, highlighting his attacking prowess. Marcelo’s searching cross sailed over Karim Benzema’s head, and appeared to be going out for a Spurs goal-kick, until Hakimi appeared out of nowhere. In his customary way of bombing forward with his dangling legs, Hakimi managed to salvage Marcelo’s cross, and at an awkward angle, squeezed out a pin-point cross for Cristiano Ronaldo, who’s header struck the post. It was a moment, among many positive ones, in a match during which Hakimi sent a message around Europe. Anyone watching that would have been shocked at his offensive qualities, but for Madrid fans watching him grow and develop in the club’s youth teams, this performance was coming, regardless of it being the 18-year old’s debut in the competition.

Former Almeria head coach Luis Miguel Ramis, who also coached Hakimi for six months at Madrid’s youth academy, put it perfectly to Bleacher Report’s Richard Fitzpatrick. Hakimi was never going to look out of place playing for Madrid, in a competition the club have dominated:

“He’s been in Real Madrid since he’s very, very young. He’s been immersed in the philosophy of Real Madrid – of being adventurous, how to get forward, how to compete. It’s just another step in his career.”

And a year later, it was obvious Hakimi needed a suitable platform to develop his game further. Madrid made the correct decision to loan him to Borussia Dortmund for two-years in 2018, after which the Moroccan, now 21, has become one of the best right-backs in the game. In his two-year spell in the Bundesliga, he’s made a total of 73 appearances and scored 12 goals in the process, and this season, he helped Dortmund to a second-placed finish, with five goals and 10 assists, forming a memorable partnership with Jadon Sancho and Erling Braut Haaland.

This season in the German top flight, Hakimi averaged 1.3 shots per game, 1.2 key passes a game, 2.4 dribbles completed per game, 2.0 tackles and 1.0 interception per 90 minutes throughout the campaign. Statistically, Lucien Favre’s team attack down the right-flank 39% of the time, so there was a lot of attacking and creative responsibility on the young shoulders of Hakimi.

But although he’s handled the attacking side of things remarkably well, there are question marks over Hakimi’s defensive fragility, and that’s likely why Madrid have agreed to part-ways with the young star, just as they did with Dani Carvajal in 2012.

And they are comparable, well at least according to Ramis:

“He’s very attack-minded. He does things quickly. He’s fast. He covers a lot of ground. Physically, he’s very powerful with endless stamina; over 90 minutes he’s no problem shuttling up and down the wing for the entire game. He never tires. When Achraf plays, he’s a very similar player on the ball offensively to Dani Carvajal. They are both very insistent and very attacking. Achraf has had a very good career so far, a rapid progression, but defensively he still has to improve. The same happened with Carvajal when he went to play in Germany, with Bayer Leverkusen, 2012 to 2013 – he improved a lot in aspects of his game until he returned and assumed a position on the first team.”

Real sold Carvajal when he was six months shy of 21. Carvajal was also a product of the academy, but had similar issues of being very raw, although Hakimi is probably the superior player at the same age. And as Ramis says, defensively, he still has to improve.

A remarkable statistical breakdown comparison between Carvajal and Hakimi was put forward to me, and it completely highlights the key differences between the two, and why Hakimi needed to accept a move away, rather than returning to sit on the bench.

Carvajal is superior to Hakimi in several facets of the game, and even stands up to the Moroccan offensively. Madrid’s first choice right-back has an expected assist (xA) rating of 3.8 compared to Hakimi’s 4.7. In terms of key passes this season, Hakimi has 34 compared to Carvajal’s 39. The passes the pair make in the final third are close too, Carvajal edges it with 112 to Hakimi’s 111. And the Spaniard also makes more passes into the penalty area, 50 compared to 42 from Hakimi.

But the key to Carvajal being irreplaceable is that he plays as an inverted right-back in Zinedine Zidane’s system, which means, he has to be resistant to the opposition’s pressing. Carvajal has proven over the years he is, he’s incredible in tight-areas and is still one of the best defensive right-backs in Europe. When you’re pressed, that’s when being composed in possession is key, and here are a few stats which show Carvajal’s superiority in that regard. Hakimi leads the Bundesliga in terms of interceptions against with 55, compared to Carvajal, who has only had 29 passes intercepted this season. Hakimi also miscontrols and is dispossessed more often, 53 and 57 compared to Carvajal’s 25 and 21 respectively, over twice as much for each statistic.

Overall, of course Carvajal is going to be superior, because he’s entering the prime of his career, so it shouldn’t come as a surprise that the 28-year old appears to be a more well-balanced player. And that’s where Hakimi saw he wouldn’t play a major role for Zidane, because his rival for the position, is quite simply immovable at the moment.

Hakimi has therefore chosen to join Antonio Conte’s Inter Milan, where he’s likely to be very comfortable. Reports suggested last week that he turned down bigger offers from the likes of Bayern Munich and Manchester City, and that to me suggests this is entirely a career and development focused transfer. He wants to play in the right system, and Conte’s formation will allow Hakimi to play as a right wing-back. The concerns of Zidane, according to the Spanish press, were that he doesn’t see Hakimi playing in a traditional back-four, and although Madrid would have loved to keep him, they’ve decided to accept the money, to help with their post Covid-19 finances.

But why have Madrid accepted such a mediocre transfer fee for such a remarkable talent? The club agreed to pay Real Sociedad €30 million for Alvaro Odriozola in 2018, which begs the question, is the current version of Hakimi really only worth €15 million more than the 2017-18 version of Odriozola? Madrid aren’t notoriously bad for selling players under their actual value, so it’s an entirely bizarre price to agree for arguably the second best young right-back in the world.

And it also now leaves the club needing another right-back. It’s obvious Zidane lost faith in Odriozola after his shocking performance against Mallorca earlier this season, and therefore, allowed him to leave on loan to Bayern, and it hasn’t worked for him there either. It’s more likely that Odriozola will be sold this summer, leaving Madrid with their academy to find another player capable of filling in for Carvajal, or, they use players like Lucas Vazquez, Nacho Fernandez and Eder Militao as make-shift right-backs – even though, Lucas and Nacho were supposed to be on the transfer list this summer. So will the plans change, or will the club be in the market for another right-back, willing to rotate and play a secondary role to the position’s player in chief?

Regardless of which decision they make, it is a crucial one. While Carvajal may be immovable when fully-fit, he has made a habit of getting injured at crucial points in a season, and it would be negligence of the highest order for a club like Madrid to not prepare for the worst.

It’s understandable that Hakimi wanted to play regularly, he didn’t want to play a secondary role, but his agent was clear earlier this month, Madrid will be on his mind: 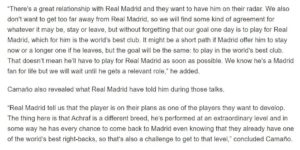 Hakimi’s mission to impress Madrid begins next season in Italy’s fashion capital, a mission with an eventual target of claiming his position at the club of his dreams.

The end: Bale returns to Tottenham after seven years at Real Madrid

Real Betis: An option for Mariano

Real Madrid’s 23-man squad for the trip to Granada